Last year, we moved my mom out of her house and into an assisted living facility. For almost-94, she’s doing remarkably well. The reason I bring this up is that the effort of moving her out of the home that she occupied for 38 years (25 of those with my dad) has unearthed a cornucopia of items, some of which I haven’t seen in decades, and some of which I’ve never seen before.

Some of my earliest blog postings have been of my father’s cars: his Corvair, his Buick, his Mustang, and his VW Bug. These four vehicles were around when I was a kid, taking my own snaps of them. This posting features photos taken earlier than that, and includes the vehicle my dad owned when my folks got married.

My dad was an early embracer of SUVs. When the first Wagoneer was introduced in the late ‘60s, he would tell me that he really liked it, although he never did buy one. I knew that when my parents got married in 1950 my father had a “Jeep” (mom didn’t have a license yet), but I knew little about it, until I discovered these photos.

From my research, I pin the year of this rig as 1949. According to Wikipedia, Jeep introduced a 4WD variant in 1949 named the “Utility Wagon”, while the 2WD was called the “Station Wagon”. In 1950, the grille changed to a V-shape and added horizontal bars. This Jeep has the original grille, and “Station Wagon” emblems on the front fenders, so I hereby pronounce it a 1949.

My dad labeled everything (those of you who know me really well now know where I got that habit), and that’s my mom in front of the car with the heading “Vermont Cabin Aug. 1952”. I was born in March ’54, and my folks talked about trips to New England during their early days together. 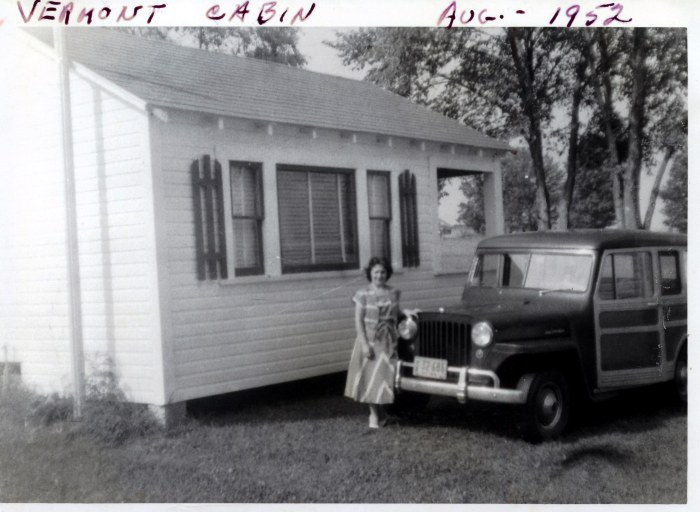 The second photo is a much clearer shot of the Jeep, with my cousins Marsha and Andy. I would guesstimate this pic as from 1950. Note the open cowl vent, two-piece windshield, dog-dish hubcaps, knobby tires, and inside spare tire mount. 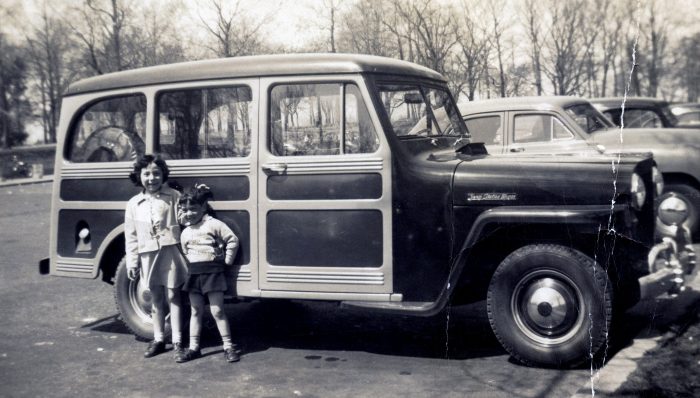 Dad bought this car new, and I came home from the hospital in this thing. I have vague memories of it, mostly of me staring at the dash while riding in the back seat. This photo is a recent discovery. This is what’s stamped on the back:

I’m certain this car was white, but you wouldn’t know it based on this photo. The color print has faded to an almost monochrome sepia. I attempted to color-enhance it, which made marginal improvements. However, you can make out the blue and red in the hood-mounted Chevy emblem. Note the two open vent windows, radio antenna, dog-dish hubcaps, blackwall tires, and accessory front bumper overrider.

Oh, how infatuated my dad was with this car! As most of you know, Chevrolet introduced the new, rear-engine air-cooled Corvair as a 1960 model. Even then, and I was only 6, I can recall his excited tone of voice when talking to my mom about the car (and dad rarely got excited about anything). He waited a year for the station wagon’s introduction in 1961. One of my strongest early automotive memories is riding in the way-back of this wagon when my dad drove it home from the dealership. Both the Jeep and the ’53 were manual gearbox cars. Mom had just gotten her license around this time, and only drove an automatic, and that also drove this purchase decision.

This photo is date-stamped May 1962, and it’s my brother Michael, in his first Communion outfit, acting like he’s about to climb in and drive away. This one was the 700 model (there was also a cheaper 500 version), and dad’s car sports an outside rear-view mirror, dog-dish hubcaps, whitewall tires, and white paint. You can barely see the “Lakewood” emblem just beyond the rear quarter cooling slats.

My father enjoyed woodworking, and he found a way to improve his Corvair, by designing and building a storage tray for the front trunk. He sent this photo to a number of magazines, including Popular Mechanics, hoping to get it published, but it didn’t happen. I know he was disappointed by that. Oh, and what’s that car next to the Corvair? Pretty sure I know, but I’ll invite you to guess.

In this 3rd and final shot of the Corvair for this post, the primary subject is my parents’ children. The photo is stamped Jan. 1963 (our clothing would imply it was taken months earlier). From left to right, that’s my brother Karl, my brother Michael, and me; I’m 8, and already a car nut. LOOK WHAT’S DIRECTLY BEHIND US!! A 1961 Chrysler Newport convertible! My research informs me that Chrysler fielded 3 different full-size convertibles that year: Newport, New Yorker, and 300. The grille texture on the 300 was completely different, and the New Yorker had chrome along the wheel well openings. Note the dashboard-mounted inside mirror, canted quad headlights, large bladed front bumper, full wheel covers, and whitewall tires. 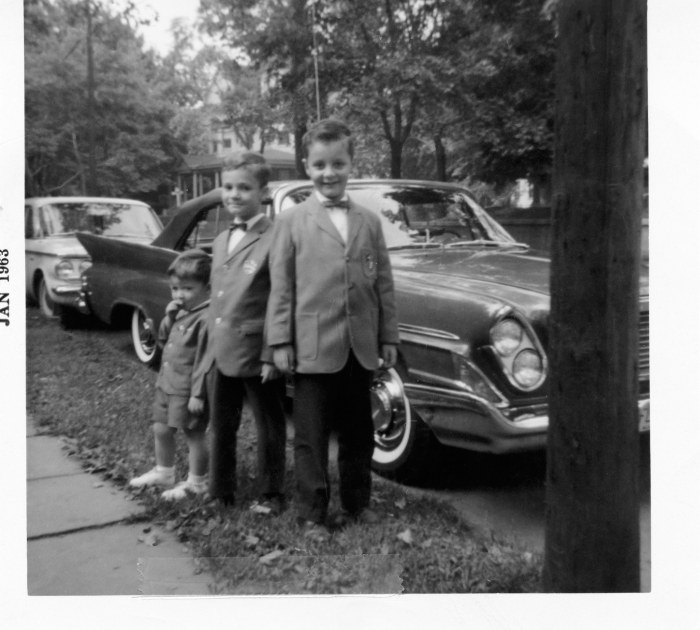 There are more of these in some other photo albums at my brother’s house, so watch for future postings of more old family cars!