G. Potter King (GPK) Auctions returned to the Atlantic City NJ Convention Center for their annual auction, held this year from Friday February 27 through Sunday March 1. As usual, the 3-day auction included a car corral and flea market, all conveniently located adjacent to each other in the huge one-room building. 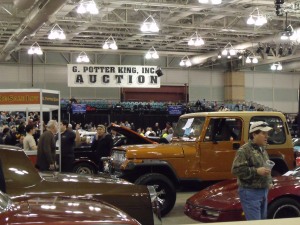 The GPK website states that they have been running the Atlantic City auction since 1985, which makes this year their 30th anniversary. Your scribe first attended in the early 1980s and has been back almost every year since. The event, first held in the old Boardwalk Hall and moved to the new Convention Center in 1998, has a number of positives. It has long stood as a mid-winter break for us East Coast car enthusiasts who put our collector cars away for the winter and have cabin fever by February. This auction house has relatively low fees, with buyers’ and sellers’ premiums at 7%. Entry fees vary, based on which day a car runs across the block. Friday is $450, Saturday is $550, and Sunday is $350. However, cars sold without a reserve are not charged an entry fee.

In spite of the positives, some less favorable trends were noticed this time. First, the vendors who usually occupy much of the (indoor) corridor space just outside the entrance doors were conspicuous by their absence. The automotive vendors who in the past have displayed their higher end vehicles at one end of the hall were also not present. It was this reporter’s casual observation that foot traffic and vehicle count were both down. These comments are balanced by noting that the quality of the consignments seemed to be better. There were fewer highly-modified cars and late-model “used cars”.

Any auction report can only highlight a small percentage of the cars on offer. As my personal taste runs to the European cars of the 1950s through 1970s, you’ll find most of the vehicles reviewed are within that category. The occasional American car is covered, especially if it is an orphan, or somewhat unusual. Given the recent rise in the collectability of the station wagon, several of them are highlighted below.

As this is my first auction report, I will point out that I have endeavored to show several photos of each vehicle (a minimum of two outside shots, and one shot of the interior and/or the engine compartment). A condition rating is assigned based on the familiar 1-to-5 scale. A price guide reference from either Cars of Particular Interest (CPI) or Sports Car Market (SCM) is shown next to the sale price or high bid. Sale prices are taken directly from GPK’s website, and it is refreshing to note that their published prices are the actual hammer prices, exclusive of premiums.

Lot #1440, 1984 Porsche 928. Champagne metallic, automatic, sunroof, black leather interior. Odometer reads 103,887. Car has been repainted, poor masking around windows detracts from what appears to be an otherwise quality job. This is the S model with small spoilers front and rear. Interior surprisingly good for a 928, with uncracked dash, little wear on steering wheel. Sheepskin seat covers on both front seats, however, a peek underneath shows intact black leather. FMVSS label confirms US spec car. Sign on car claims recent timing belt service. In spite of the miles, appears to have lots of life left.
• Condition: 3
• Sale price: $6,500
• SCM range: $9,000-12,000

Lot #1478, 1976 Triumph TR6. Last year for this model. Mileage 40,000, looks like that could be original. Bright green with black interior. Redline tires on Triumph alloys. Repaint good with some dirt in paint, but shows well on broad surfaces of hood and trunk. Engine compartment near spotless. Interior clean, no obvious defects. Overall presents very well, can be driven with pride or taken to local cruise-ins.
• Condition: 2
• Sale price: result not posted
• SCM range: $12,000-20,000

Lot #1494, 1980 Triumph Spitfire roadster. Last year for the Spitfire. Sign on car claims 20,000 original miles. White with tan vinyl & houndstooth upholstery. Interior looks hardly worn. White hardtop included, no soft top visible for inspection. Paint probably original, not great, but may be what a British factory did in 1980. Triumph steel wheels and trim rings with whitewall tires. 3-tone stripes along sides of car, were red/white/blue, red is now faded. Car appears to really have 20,000 miles and looks unrestored. If you want a Spitfire, this could be the one to have. It’s a shame that someone owned this car for so long and drove it so little.
• Condition: 2-
• Sale price: $8,000
• CPI range: $5,000-11,000

Lot #1794, 1974 Jaguar E-type convertible. Odometer reads 43,953. Silver, red interior, V12, stick shift. Chrome wires with red stripe tires. Very striking in person, appears to be recent restoration. Little to fault. Both doors shut well. One minor quibble is that chrome strip missing from exterior of door tops. One of the better color combos for this car, especially given what some of the other choices were. An E-type to have if one wants (or can live with) the V12 engine.
• Condition: 2+
• Sale price: $63,000
• SCM range: $55,000-75,000

Lot #1824, 1959 MGA roadster. Odometer reads 28,494, nothing about car convinces me that it’s not 128,494. Red with black. Decent older paint and interior, but not outstanding. Luggage rack on rear deck. Painted wire wheels with blackwall tires. Four-cylinder engine painted dark red. No attempt to detail engine compartment. Blow-by hose missing from valve cover. Steering wheel wrapped. Would be helped by a good detailing. Until then it’s just a driver, at least a solid one that can be used.
• Condition: 3-
• High bid: $19,5000 (not sold)
• CPI range: $23,500-49,000

Lot #1847, 1960 Jaguar Mark II 4-door. British racing green, dark tan leather interior. Odometer reads 66,000 miles. Stick shift car with Jag’s famous inline six. Chrome wire wheels, blackwall tires. Paint is decent, but car is dusty (note that for this car, my photos do not do justice to either paint color or condition, both of which appeared better in person). Interior full of wood and leather and smells it. Driver’s seat worn with cracks almost but not quite to the point of needing replacement. Steering wheel appears to be aftermarket. Outside mirror on each front fender. “Mark II” and “3.8” badges on rear deck. One of my favorite cars at the auction, this thing oozed old world British charm.
• Condition: 3+
• Sale price: result not posted
• SCM range: $25,000-32,500

All photographs copyright © 2015 Richard A. Reina. Photos may not be copied or reproduced without express written permission.