In 1993, with seven years at Volvo Corporate under my belt, I had done my share of domestic and international business travel. Volvo generously allowed employees to keep and use their own earned frequent flyer points. In April of that year, with some of my points about to expire, I burned a bunch of them by taking a long weekend trip to Phoenix AZ.

Now, Phoenix was not exactly my first choice as a vacation hot spot. Of course, there was an ulterior motive: I had heard about the auto salvage yards in the area, mainly filled with ‘50s-‘60s Detroit iron (as rust was not an issue in the Southwest). My 1967 Dodge Dart was in need of a few components not available in the aftermarket. Telling this to my buddy John M, who owned a 1963 Buick, resulted in being given a shopping list for his car. (I sold the Dart several years after this trip was taken; John still owns that ’63 Wildcat convertible today.)

Packing little more than a weekend bag, my camera, and some cash, I was off to Phoenix. Expecting warm weather, I didn’t bother with sweaters or coats. Good thing, too, because Phoenix was having a heat wave. Temperatures reached 114 degrees F during my stay, making me very glad that my hotel’s swimming pool was open.

Finding the salvage yards was easy. I brought the Yellow Pages from my hotel room with me, and armed with a map I picked up in the airport, off I went in the rental car. While I did find my parts, the real treat was being able to stroll through these yards at my leisure. The staff was more than willing to let me wander, scrounging for parts, admiring the cars, taking photos, and generally acting like the East Coast tourist I was.

I’ve long forgotten what I purchased for the Dart and Wildcat (John, do you recall?). However, the sights of the 4 or 5 yards I visited were captured on color film, and looking at them brings me back to that busy (if blazing hot) weekend. Here is a small selection of those photographs. 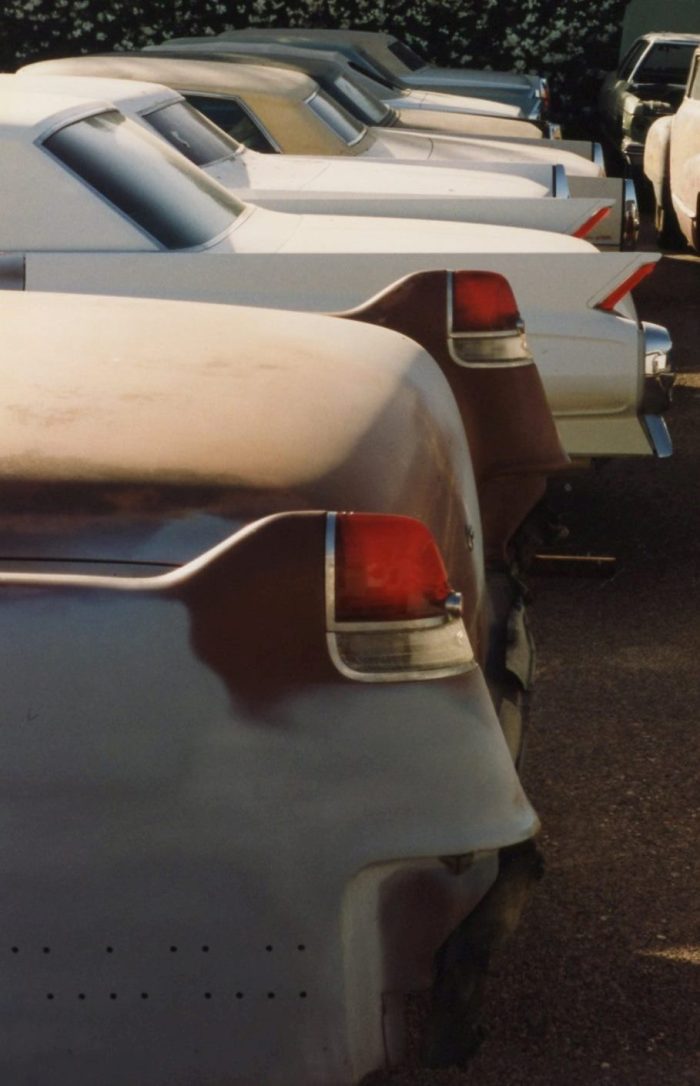 The evolution of the Cadillac tail fin

Photos were taken with my Nikon EM camera; film info not recorded, but likely Kodak Gold, either 100 or 200 ISO. Prints scanned with Epson V500 photo scanner.