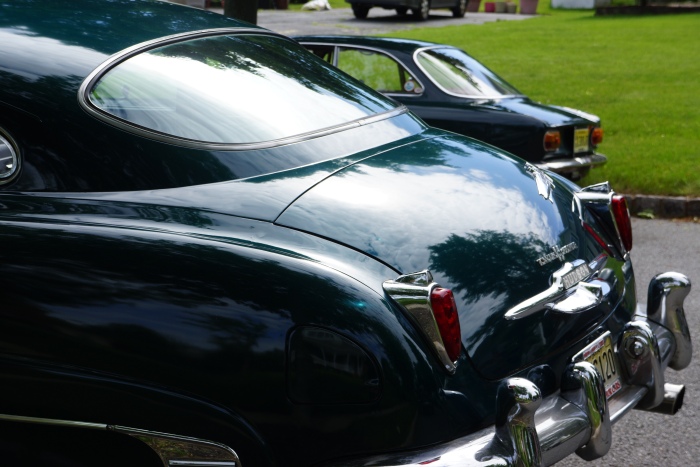 The members of the New Jersey Region of the Antique Automobile Club of America (AACA) again provided a number of antique and classic cars to participate in the Hillsborough NJ Memorial Day parade, held this year on Saturday May 25, 2019. This was my third consecutive year in the parade, as it’s local to me. (You can read about the 2017 and 2018 events at the underlined links.)

The splendid late May weather helped produce an excellent turnout for the club, with over 20 vehicles participating. The event chairperson, Bob Hudak, encouraged non-AACA members to also drive with us, as long as the vehicles were 25 years old or older. Several pre-war cars, including a 1929 LaSalle, a 1935 Packard, a 1939 Ford, and a 1940 Buick showed up.  Orphan marques Hudson and DeSoto were there, as was good ol’ American muscle, amply represented by a 1966 Corvette 427 (still with its original owner). A new club member brought his pristine 1959 Ford 2-door sedan. And like last year, I was again the only driver with a non-domestic vehicle.

The parade started moving precisely at 10:30 a.m., and seemed to snake along more slowly than in previous years. Hillsborough is a diverse town, and I have always enjoyed taking in this true slice of modern America: people of all ages, races, and genders wearing and waving the red white & blue, cheering us on as we slowly inched past. I’ve also noticed, as you can see in the photos, that once a camera is pointed at them, most people love to smile and wave!

It’s a short parade; we cruised past the viewing stand and were on our way back home before 11 a.m. The Alfa performed flawlessly. It had better behave, as it’s taking me to Pittsburgh and the Alfa Romeo Owner’s Club (AROC) annual convention in July. We’ll have more to say about that in the coming weeks.

One thought on “The 2019 Hillsborough NJ Memorial Day Parade”