The New York Auto Show is the longest continually-running automobile show in the United States. New York was the first city in the country to host such a show, which it did in 1900. The show has been an annual tradition ever since, the only exception being the 2020 pandemic cancellation.

During the first half of the 20th century, the show was held within various exhibition halls throughout Manhattan. When the New York Coliseum at Columbus Circle (W 59th St.) opened in 1956, the show was moved there and remained until 1987 when the brand new Jacob Javits Convention Center took over host duties. The Javits Center continues to be the show’s location.

In 1969, as a car-crazed teen, my father took me to the Coliseum to see the show for the first time. He wanted to see the show too, but it wasn’t his first visit, as he had brought home show programs from previous years (which I wish I still had). I grabbed my camera and off we went. It’s likely we drove into the city; both of us at that time were commuting into Manhattan from our Staten Island home, he for work, and I for high school, so perhaps we wanted a break from the subway.

The exact day of our attendance is lost to history, but it must have been a weekend. The internet informs me that the 1969 show was held from Saturday April 5 through Sunday April 13. Easter was Sunday April 6 that year, and amazingly, this plan of holding the public show during Easter week is still the plan today.

Here’s a brief video overview of that 1969 show, and you can see a few of the vehicles that are among the photos below.

I took 12 photographs at the show, which means I shot an entire roll of film with my Kodak 127 Brownie. My photographic skills in 1969 needed a lot of work, and to be fair, the photos document how crowded it was, so getting a clear line of sight to any vehicle was a challenge. Looking at these pictures 51 years later provides some insight into my young automotive mind. In general, the production cars I chose to snap are still of interest today. The concept cars I chose are quite humorous in retrospect, and maybe not surprisingly what a young boy would find funny.

Here are the 12, with a brief blurb under each.

I liked all of the C2 Corvettes (of course, we didn’t call them that in the ‘60s), and liked the new-for-’68 C3 Corvette even more (not an opinion I still hold). The Mako Shark-inspired styling, with its incredibly low front end, peaked front fenders, pinched waist, and flying buttress rear pillars on the coupe was so racy to me. There was a crowd around this car all day, and I felt lucky to capture the left front fender and hood.

I don’t recall being a big fan of this styling (and am still not), but it was probably  the blacked-out hood, hood scoop, factory ‘mags’, and redline tires that appealed to me.

By 1969, the big front-driver from Olds was in its 4th model year, and although the overall body shape hadn’t changed, the front and rear ends had a heavier look, losing some of initial lightness of the ’66. I’m struck by this typical late ‘60s color combo: a dark metallic hue with white vinyl roof, white pinstripe, white wall tires, and white interior! Note the F-85 sign in the background, which seems odd now because I would have expected Olds to more likely market the Cutlass nameplate. 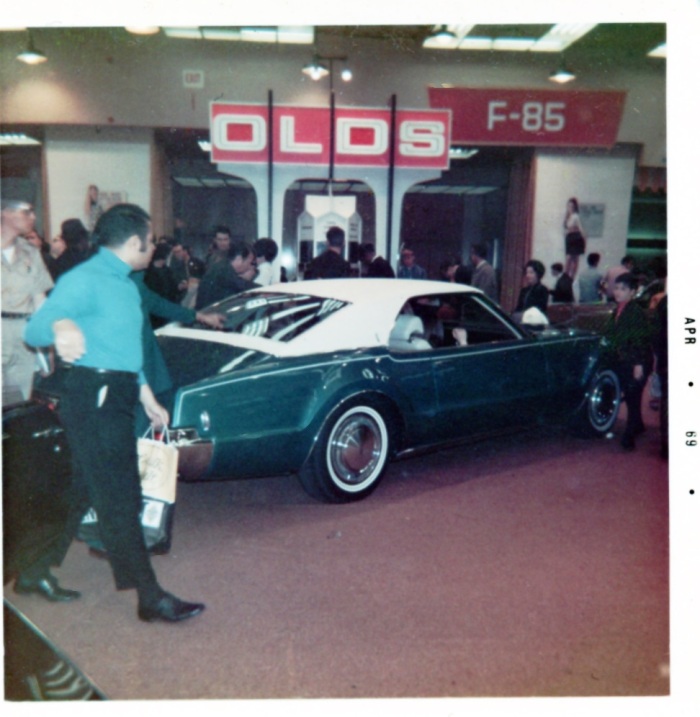 General Motors’ other FWD luxury car was in its 3rd year, with exposed headlights (after two years of concealed ones) as one of the few styling changes. This paint color looks identical to the Olds! Note the Mercury/Lincoln sign and the very low ceiling.

It’s interesting to me that I would even be aware of this car. I doubt I saw any on the streets of Staten Island. In case you don’t know it, the brief backstory is that the original Avanti was a model produced by Studebaker for only two years, 1963 and 1964. When Studebaker ended production, the car’s tooling was purchased by two men who ran Studebaker dealerships. They reintroduced the car as the “Avanti II” in 1965, so this little-changed 1969 version was in its 5th model year. I wish my photo had captured more of the sign to the right.

My father, who rarely expressed his opinion about anything out loud, let it be known to me that he liked the Jeep Wagoneer. There’s no doubt that his admiration for it extended back to the Jeep Station Wagon he owned when he first married my mom. Something this large and truck-like held no interest for me, although this photo reveals that Jeep did its best to market this to the masses, with chrome bumpers, a full-width bright grille, roof rack, full wheel covers, white wall tires, and exterior wood-grain applique. Yet you can see the front leaf springs (!) peeking out below the bumper. 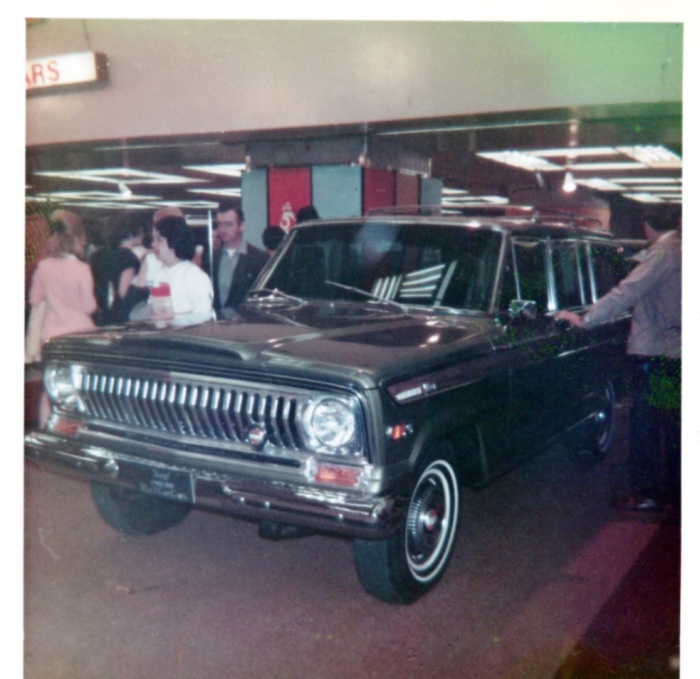 I loved the ’69 Firebirds when they were introduced, and I still find them among the best-looking Firebirds ever. I’m including this under “Production Cars” even though this one appears to be slightly customized. The yellow-and-white seats and door panels, along with the yellow color-keyed wheels, don’t look factory, yet on the other hand, are probably slight cosmetic changes, possibly done by a local dealer. And can someone tell me why the three people behind the passenger-side A-pillar are all wearing sunglasses?

There’s nothing I can say in my defense, except, I wasn’t alone in wanting to see this car – look at the crowd behind it! Also note the sign in the lower right, which reads “Petersen Publishing”. What was their involvement? Where is this car today?

With help from the Internet, I identified this car as the X-1. The euro headlights, hood pins, cut-down windshield, and rear roll hoop were undoubtedly attractive to me. Look at the mob behind it, as well as the Pirelli sign. 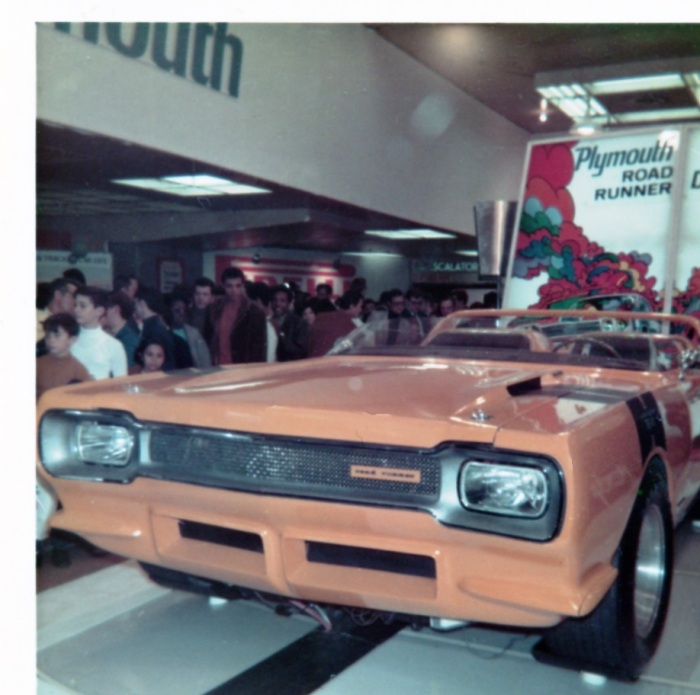 Bathroom humor was still funny to me. Just watch out for that hot exhaust when entering and exiting. 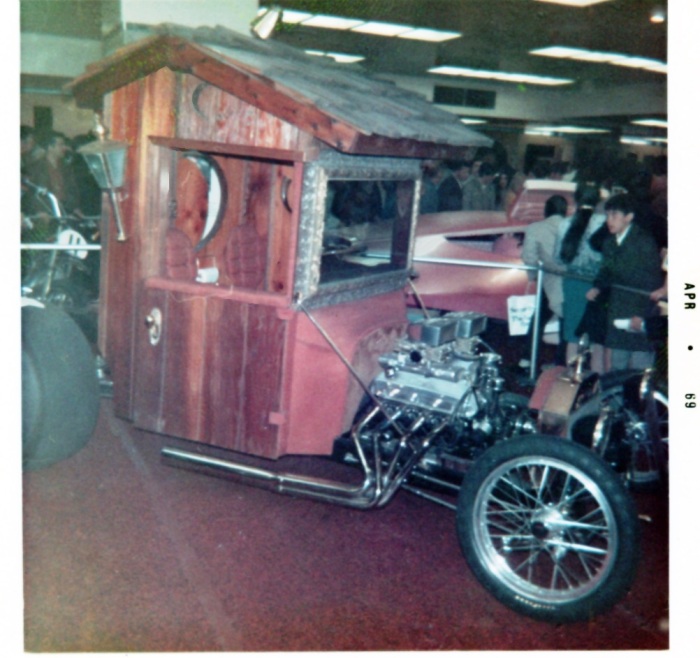 Speaking of bathroom humor, it doesn’t get crazier than this (or if it does, I don’t want to see it). Like the X-1, I only know this builder’s name thanks to Google.

This is one of the vehicles featured in the short video clip; yet in the movie, the car is blue, and here it’s white. An internet search for photos shows the car in both colors, as well as gold. Perhaps Buick was trying out different colors to gauge audience reaction, or borrowing a trick from ol’ Shelby, they wanted to give the impression that there was more than one Cruiser Concept. Note the Ford Cortina sign and British flag in the background.