Spring Carlisle 2016, featuring an automotive flea market and car corral, was held at the Carlisle PA Fairgrounds from April 20th through 24th, 2016. In recent years, parent company Carlisle Events has also hosted a collector-car auction during the same week. This year, the auction was run on Thursday and Friday the 21st and 22nd at the Carlisle Expo Center, one block from the fairgrounds.

About 350 cars and trucks were driven, pushed, and dragged across the block. This is said with some facetiousness, as overall, the quality of the consignments was quite good. The few rats were obvious, and a cursory inspection of any of the vehicles revealed their true nature.

Overall highlights included the aforementioned strong condition of most of the entries, sufficient seating for bidders and spectators, a well-ventilated and well-lit indoor auction area, and plenty of available food and drink (including the hard stuff, which helps to lubricate your bidding arm).

On the downside, the Carlisle crew was lax in getting run sheets for Thursday printed when promised. During a phone call made earlier in the week, a staffer stated that run sheets would be ready at 8 a.m. Thursday morning. However, upon my arrival at 9, they were not out yet. Repeated trips to the windows were met with promises that they would have them “within the hour”. They finally made it out at 12:40 p.m, a little more than one hour before the auction’s start. At least Friday’s run sheets were out at 10 a.m.

Carlisle Events also seems to allow consignments to be added on the day of the auction; making matters worse, these vehicles in some cases do not show up on the grounds until hours before they are scheduled to cross the block. Prospective bidders have little chance to inspect the goods, and sellers are simply hurting themselves.

The auction business is still new to the folks who work for Carlisle Events, and while everyone seems to be trying very hard, the production has an amateurish, mom-and-pop feel to it. However, the crowds were there, cars changed hands, and as long as they keep trying, they should get better at this.

Following is a sample of the vehicles which crossed the block. CPI (Cars of Particular Interest) values are from the March-April 2016 price guide, value range is good-to-excellent, with amounts rounded to the nearest thousand. Reserve is shown on no-sale cars if the block announced it.

T106 1993 Chevy Corvette coupe, VIN 1G1YY23P2P5107900, LT1 350, 6-speed manual, mileage is 91000, red, smoke top, red interior, paint looks original, nose is unchipped, Corvette alloys are clean, one touch-up on driver’s door edge, typical wear to C4 window seals, red on red is garish, but driver’s seat shows little wear. If you like red, this was your car. This did not look like a car with 90k on it, and there was little to fault. There were at least 6 C4s among about 30 Corvettes at this auction, and in retrospect, this appears to be one of the best deals of the week.

T138 1965 Dodge Monaco, VIN D456138536, 2-door hardtop, 66,000 original miles, 383 4-barrel, automatic, dark burgundy, white vinyl top, burgundy interior. Dent in front of hood is heartbreaking, given how clean and straight remainder of car is. Tires appear one size too small. Car is stunning in person for its originality. Interior is a knockout – center console, buckets, gauges, cane inserts on door panels and seat backs. Glass good, doors shut OK. This was a highlight of the auction, both for its rarity and its originality. Alas, if bidders want a Mopar, they want a hemi, and the reserve was not met.

F330 1977 Fiat 124 spider, 124CS10120860, blue metallic, black top, black vinyl interior, Fiat alloy wheels. No visible rust, paint looks OK if a bit thick in places, not sure that this shade of blue is a factory Fiat color. Interior decent at first glance; however, steering wheel cracked. Gauges and seats show no obvious problems. With a new Fiat 124 spider due to hit dealerships in the fall, some have speculated that the old Fiats will start to move up the price ladder. The audience here did not agree.

T117 1980 Mercedes Benz 450 SL, VIN 10704412065489, mileage is 129,734. New tires, soft top included, hard top in place. Gold with dark brown interior. Aftermarket lights in front plate look tacky, front fog lights, blackwalls on MB alloys, car is dirty overall. Interior: both seats show leather which is cracked and dried, carpet faded from brown to green. Buyers will step up for high mileage cars which are clean; they will shy away from high mileage cars which are not. There are too many SLs on the market at any time to make this one worth more than what was bid.

T198 1988 Nissan 300ZX turbo, VIN JN1CZ14S0JX203504, white, grey and black interior. Six-digit odometer reads 098558. Shiro special edition , 5-speed manual, Recaro seats. Pearl white paint with matching wheels scream ‘80s disco. Minor wear on driver’s seat bolster. Interior looks OK, has T-tops. Black rear spoiler faded to light grey. These Shiro cars, of which a little over a thousand were made, play to a very narrow audience. CPI does not call out a separate price for the Shiro package. Car was seen the next day across the street in the Car Corral, with an ask of $12,900, but on the block, it was said that “10” would get it done. Caveat Emptor.

T118 1986 Pontiac Trans Am, VIN 1G2FW87F4FN228262, 5.0 V8 fuel injected, rare Recaro seats, T-tops, white, gold trim, black/tan/grey interior. Odometer reads 35,263, claimed to be original. Paint OK, could use buff out, nose unmarked. Screaming chicken reduced to Cornish hen on hood, B-pillars, and rear valence. Interior condition does support miles, as seats show no wear at all. No signs of wear on wheel, shifter, pedals. A decent looking Trans-Am, and the low miles and Recaro seats make it worth a little more than what was bid.

F332 1984 Porsche 944  WP0AA0944EN465320, red, tan interior, 2.5L inline 4, 5 speed, sport seats, sunroof, black and silver Porsche alloys. Odometer reads 61,778, might be on first go-round. Paint looks thick in places, but repaint shows well, with no overspray. Body color side rub strips, some small touch ups. Wheels are slightly marked up. Interior not torn, but dirty, leather dry. Aftermarket Blaupunkt sound system. Porsche floor mats. There are a million (OK, a few less) 924-944 cars for sale at any time, with  conditions running the gamut. This car was straight-looking, and if the mileage is accurate, represented a very good buy at the sale price.

T160 1969 VW Karmann Ghia coupe, 4-speed, odometer reads 63,989, VIN 149863189, dark red, sign says  “one repaint on rust free car”, black interior. Rear side reflectors, no front reflectors. Wide white wall tires look out of place on late ‘60s car. Nose unbent. Black wipers look out of place, all outside stainless trim is good. Paint looks fresh. Interior smells musty, cracked dash fixed with tape, seat upholstery OK. Carpet shot. FMVSS label confirms US spec car. Overall, car appears original except for repaint. Chrome on bumpers very thin, starting to peel and pit. These sporty VWs used to be all over; the tin worm ate most of the northeast ones, so there was plenty of interest in this honest-looking example, which sold at a number fair to buyer and seller. 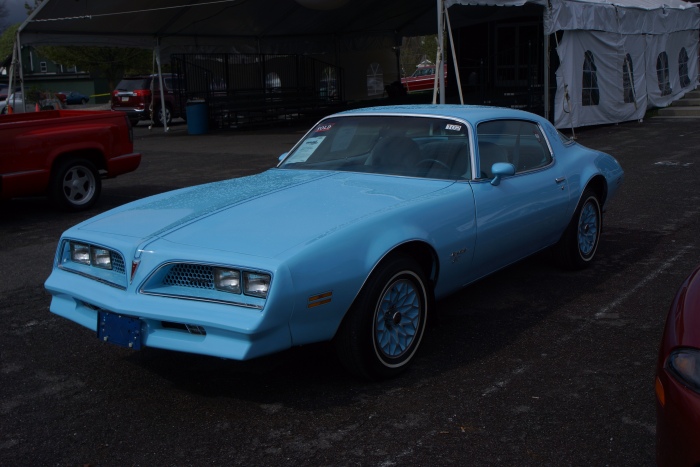 T183, 1962 Buick Invicta convertible: striking in off-white with a two-tone tan and beige interior, this was one of the few auctions cars almost worthy of a #1 condition rating. Sold for $25,500. Have the only one at the next Cars & Coffee. 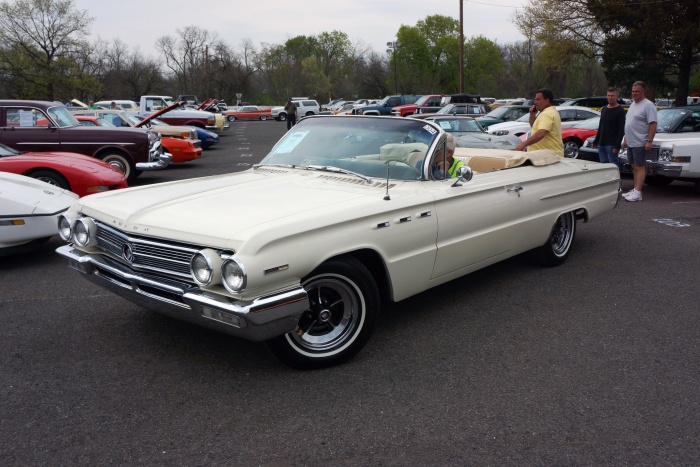 F312, 1966 Ford Mustang convertible: a late entry, this car’s two-tone pony interior was striking, but possibly was the only good thing about it. Quickie repaint in blah beige, filthy underhood, it was bid to $17,500 and not sold. Owner should have cut it loose (see lot F355 above). 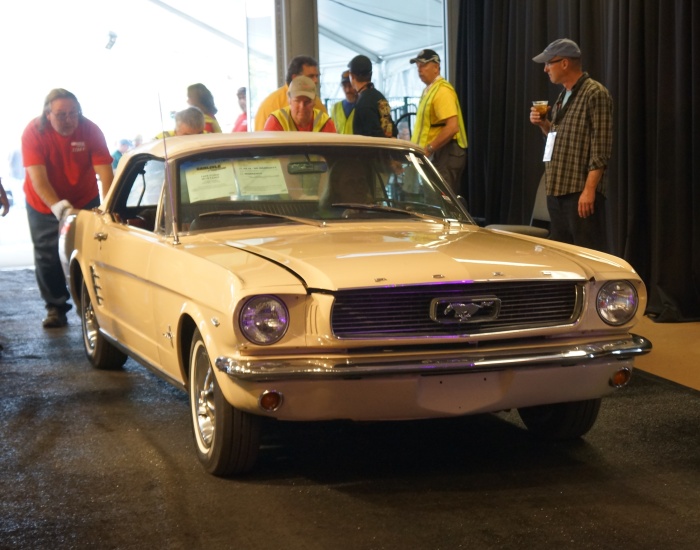 F319, 1974 MGB: Cosmetically, this car was almost perfect. However, we observed the Carlisle staff struggle to get it running on Thursday. Friday morning, we struck up a conversation with the owner while he “tuned it up”. He told us he had just bought it (to flip it), but the spark plugs were hand-tight, and the distributor hold-down was completely loose, so at idle, the engine vibration constantly changed the timing. It did drive OK across the block, where it sold for $13,100.

F434, 1960 Rolls Royce Silver Cloud: My photo does not do justice to the poor paint on this automobile. A literal barn find, one observer was overhead to mutter “the most expensive car in the world is a cheap Rolls Royce”. Bidding shocked me when it sailed past $5,000 to end at $8,900. 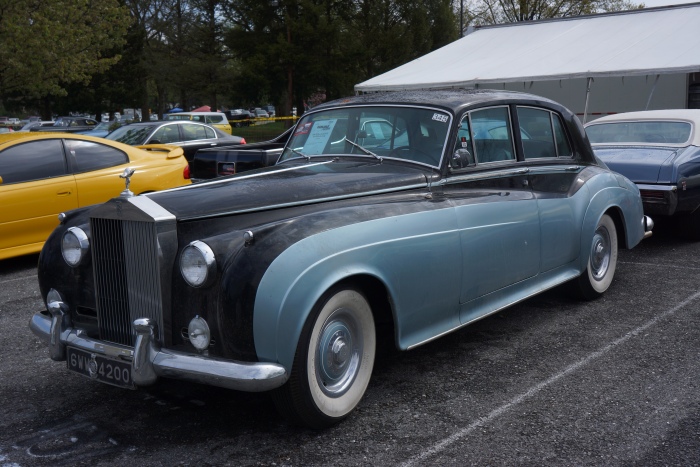 F469, 1994 Jaguar XJS V12 convertible: The colors were right, as it’s hard to argue with BRG and saddle, but this car gave off a vibe of neglect. If you’re not afraid of the big 12, perhaps you could do worse than the successful bidder who took this home for $8,500.