Mecum Auctions came back to Harrisburg PA for the third consecutive year, and held its auction event at the Pennsylvania Farm Show Complex on July 21-23, 2016. Your correspondent was in attendance, also for the third year running, and while external appearances were roughly the same, the men and women of Mecum have been hard at work on incremental improvements.

Two years ago, parking was confined to off-site lots which required shuttle buses to usher attendees back and forth. Food was only available from counter service inside the building, with limited menu choices. Signage everywhere was poor, leaving many to wander and wonder which way to turn.

This year, ample parking was available within the Complex parking lot itself, allowing one to be inside within minutes. Food trucks lined the back parking lot, offering the traditional burgers and chicken, plus crab cakes, po’ boys, pizza, and Greek gyros. Not only were large signs posted everywhere; upon entry, all who paid admission (NOT just bidders) were handed run sheets, maps, and daily programs. The improvements were palpable, and it reinforced the juggernaut that Mecum has become in the collector car auction business.

The quality of the consignments seemed rather consistent each of the three years, although this year, there were fewer of the vehicles that light my fire (original and/or unrestored American cars, and European sporty cars). The field was heavy with hot rods and resto-mods, and of course, the always-expected Mustangs, Camaros, and Corvettes (as my friend Larry said of them, “the backbone of the hobby”). The latter three models easily comprised about 20% of the total offerings.

Sitting through two complete days of across-the-block auction action, the room was almost constantly abuzz. Real bidders were bidding, and most cars generated a high level of excitement. When that seemed to wane, Mecum seemingly just turned up the volume on the already-blaring PA system to make sure you were awake.

Sell-through rate appeared strong (SWAG: 70%), helped by Dana himself arm-twisting owners on the spot to drop their reserves and close the deal. Are some prices off their highs of one to two years ago? Yes. Is everything selling at distress-sale levels? Absolutely not. To those who think that the collector-car hobby is in a slump, I hold up Mecum Harrisburg 2016 as Exhibit #1 that it is not. And if it was slumping, it has bounced back with a vengeance.

Below, in lot number order, are my thoughts on an varied group of cars and trucks which were interesting to me. You, no doubt, would have chosen 14 different vehicles to profile. Let me know which of these, if any, you would have bought for the price.

This generation SL is hot right now, especially the 450-SLs from the late ‘70s like this one, and the final 560-SLs. Many of the ones we see at auction are dogs; this one was decidedly not. Price was not a bargain, but fair for a very presentable Benz. This car can likely be enjoyed and then sold in several years for the same or a little more. 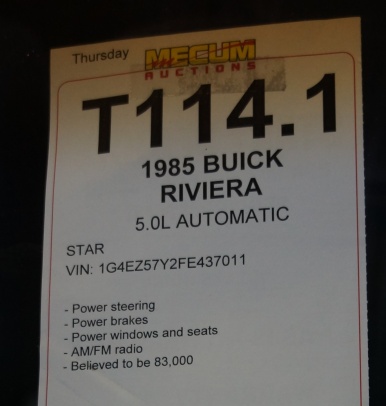 The scene on the auction block was something I’d never witnessed before. As the car came up, “auctioneer A” could not get a single $1,000 opening bid for it. He asked, begged, cajoled, screamed, and pleaded, all in vain. There was a long pause, and (this was the novel part) Jimmy Landis, Mecum’s well-known town crier, grabbed the microphone and said “let me try”! But still no bids. Jimmy turned to the owner, and into the microphone, said “sir, nobody wants your car!” Finally, someone in the crowd, recognizing that they could buy a running, driving, V8-powered American automobile for cheap, bid $1,000, then $1,500, then $2,000, at which point Jimmy screamed SOLD!!! This entire process took the better part of 10 minutes.

We checked out the car later. The sides were laser-straight, but the black paint on the roof was a little sketchy. The interior was not trashed, and it all seemed to be there. Someone got a driver for very little money.

There were a large number of GM pickups from this generation (’67-’72) at the auction, most of which were either restored to #1 condition or were rodded. This was one of the few that appeared to be original and unrestored, and the truck had an honest vibe to it. The price seemed to favor the buyer; a few thousand more would not have surprised.

Jaguar XK8 convertibles outsold their coupe counterparts 10 to 1. Coupes are therefore thin on the ground, and it was nice to see one. However, as I sat in the driver’s seat, “crumbs” appeared on my shirt. Looking up, I saw…. that the car had no headliner. This selling price (no reserve) seems fair, but don’t forget to factor in the parts and labor for a headliner. 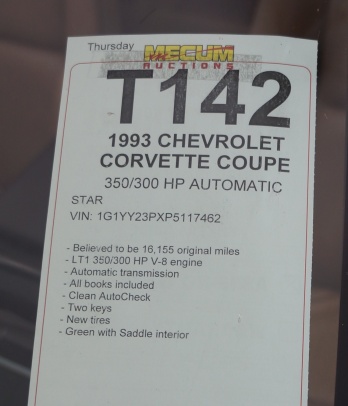 Green over tan is popular on MGs and Jags, but not to everyone’s taste on America’s Sports Car. The car was clean and purportedly very low miles. Price was a bit higher compared to what we saw at Carlisle just 3 months ago; are C4s on the way up?

As Porsche 911 prices climb beyond a reasonable level for the average collector, other Porsches gain interest. Several years ago, there was no such thing as a five-figure 944. This car, from the model’s third year of production, was highly optioned, and in an attractive and rare color. But it’s the later 944s which are getting bucks in the mid-teens. This car should have sold at this number.

The 1991 redesign of the XJS actually improved its looks, at which time, the introduction of a 6-cylinder engine and a full convertible meant most were built that way. That makes this late 12-cylinder coupe rare, but as we know, rare does not always equal valuable. The bid price seemed close enough to me, but not to the owner. One would guess we were no more than a few grand away from the reserve.

“I got me a Chrysler it’s as big as a whale” sang the B-52s, and it certainly applies here. This car was fascinating on many levels: its size, originality, color scheme, and details like a shrouded dash with hide-away radio panel. This car was American late ‘60s luxury at its finest (if only it fit in my garage). A weekend spent detailing the land yacht (especially underhood) might have garnered a sale price a thousand or two more than the high bid. 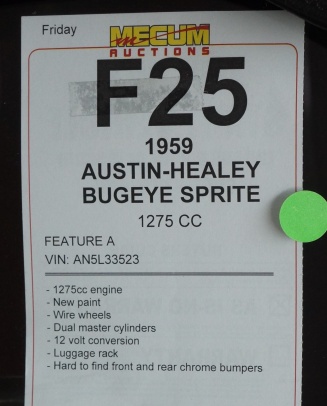 All my friends know that I like small cars, and I’ve always been smitten with Bug-eyes. Sitting in this one, I was appalled at the complete lack of attention to detail. The overall vibe was of a car that was quickly slapped together for resale. Bug-eyes routinely trade in the $10,000-20,000 range, depending on equipment and condition. I don’t know what shocked me more: that the bidding reached $13,000, or that the owner didn’t grab the money and run. 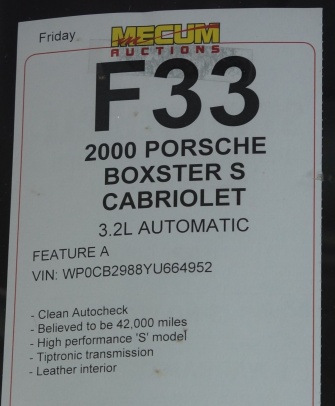 The color scheme, bright yellow with a BLUE cloth top and black interior, turned me off, as did the automatic transmission. There are too many other choices among used Boxsters to rate this as anything but on the expensive side for a late model play toy.

The XKR is the supercharged version, and this car (complete with headliner) deserved more. The miles were relatively high at 85k, but a mid-teens sale price would still be fair.

I fell in love again with an Italian redhead, but compared to last year’s 2-cylinder job, this girl runs a 4-banger and is water cooled. Thinking I might steal it if bidding stayed under $10k (hey, this audience is here for ‘murican muscle), bids quickly exceeded that and was hammed sold at what is admittedly a fair price. Just don’t take it on the Turnpike. 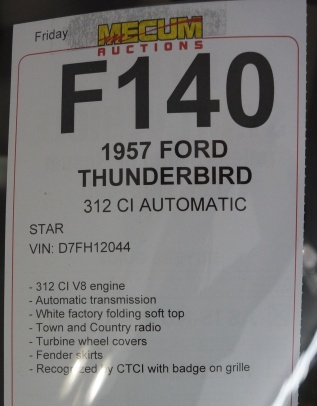 The windshield decal claimed that the car has had the same owner since 1969, which seemed to play in this car’s favor, as it gave the appearance of a car that has been well-kept while still being enjoyed. Two-seat T-Bird prices are all over the place; as the final year of the first-gen car in an attractive color, I call this well-bought.

There’s one at every auction – this one was in the frequently-seen two-tone combo of red and white. It appeared somewhat over-restored, save for some orange peel on the door. I spoke to the owner, who acknowledged that he might be out of his element with this audience, then confided in me that he needed to get $30k for it. I guess Dana changed his mind, because the hammer dropped $5k light.