Skip to content
HomeBack to Print: True’s Automobile Yearbook for 1960

Car magazines and books are a weakness of mine. My automotive library hold hundreds of car books, and hundreds of various magazine titles. I’ve written in the past of the Car & Driver collection which extends back to the early 1960s. Every year for the past 30+ years, when attending the Carlisle and Hershey flea markets, I am on the lookout for a hardcover or softcover treasure to take home.

Several years ago, a visit to a “$2 bargain bin” at Carlisle yielded this treasure: True magazine’s annual Automobile Yearbook, with none other than Uncle Tom McCahill on the cover. (True, also known as “True, The Man’s Magazine”, was published from 1937 to 1974 by Fawcett Publications. During the 1950s, famous automotive author Ken Purdy was its editor.)

The year 1960 was a watershed year in the U.S. car business, as the Big Three domestic manufacturers each introduced a compact car to fight the growing import car invasion. One vehicle each from GM, Ford, and Chrysler made the cover, but the only compact to do so was the Corvair. Note the picture caption: by mentioning “rear-engine”, perhaps it was seen as Detroit’s best shot to beat Volkswagen at its own game.

The article “Detroit: 1960”, written by McCahill, summarizes the market-share drubbing the big boys were facing, and not just from the imports, but from Rambler and the Studebaker Lark too. As the decade was dawning, these executives were counting on the accuracy of their prediction that the compacts would account for 20% of the new car market. As we know now, it was impossible for them to see what else was in store: intermediate-sized cars, pony cars, government regulations, and further penetration by non-American makes.

Uncle Tom always had a way with words. In this article, he spews out some beauties, such as “… opinions as to what percentage of the market these small cars will pull are as wild as a Third Avenue saloon on Saint Patrick’s Day”; “… good imports …. appear to be put together by guys who really liked what they were doing and not counting the days until their next strike”; and “… 1960 promises to be the wildest year since Louis Chevrolet sat on a bear trap”.

Imports were still viewed as a separate category, deserving of their own story. “The Report on the Foreign Cars” article highlights the tremendous rise in market share, which increased from 1.65% in 1956, to an anticipated 10-12% by the end of 1959.

More telling is this list of the “25 Best Selling Imports as of Jan. 1, 1959”. Number One is no surprise. But the 2nd best-selling car in America was French?

To those who may be seeing data like this from the late ‘50s for the first time (or for those who have not seen this in a while), there are two surprises: one, the relatively low positions of future German giants such as Mercedes-Benz (14th), BMW (19th) and Porsche (22nd); and two, the complete lack of any Asian brands in the top 25 positions.

Indeed, the vehicular landscape would change again (and again). No one would have predicted that England, which held FIVE of the top ten positions, would all but disappear from the ranks. Borgward outsold Jaguar AND Saab AND Alfa Romeo? Really? 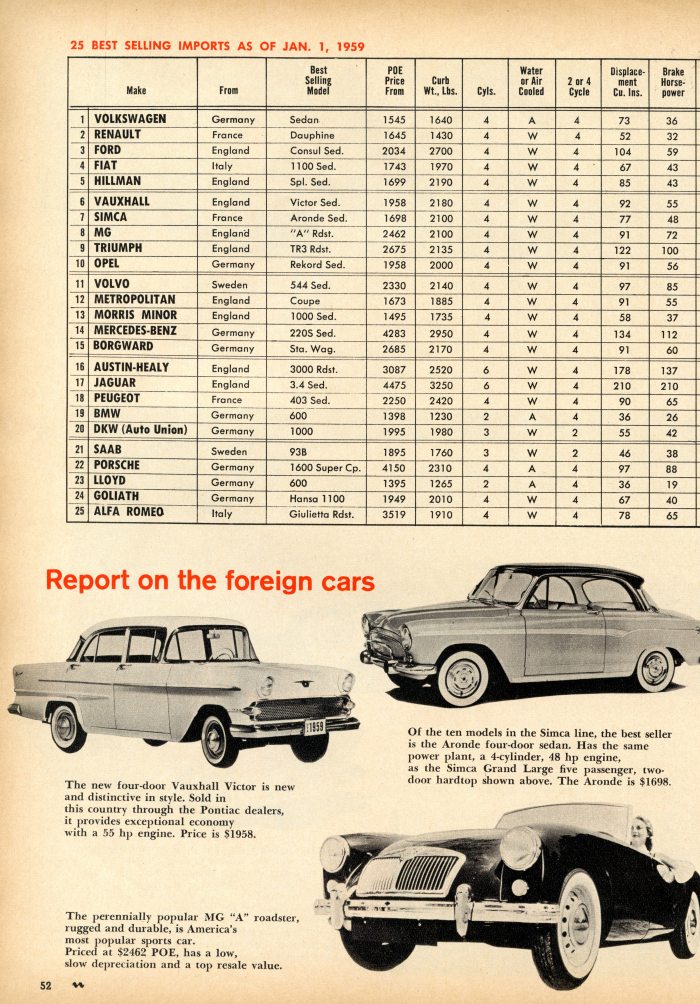 No car magazine from this time period would be considered complete without an article on safety. This excerpt is surprisingly accurate in listing energy-absorbing bumpers, headrests, safety belts, roll bars, and crash-absorbing front structures as features which would save lives. But it would take an act of Congress (the 1966 Motor Vehicle Safety Act) to get many of these features installed. I’ll leave it out of the discussion whether that was because consumers wouldn’t pay for them, or because the car makers preferred to emphasize styling and horsepower.

AND, no car magazine from this time period would be complete without an article about… flying cars! (There was an obvious lack of articles from the 1960s about the Internet.) Perhaps it’s best these never came to pass – imagine the issues if pilots were distracted by their cell phones. 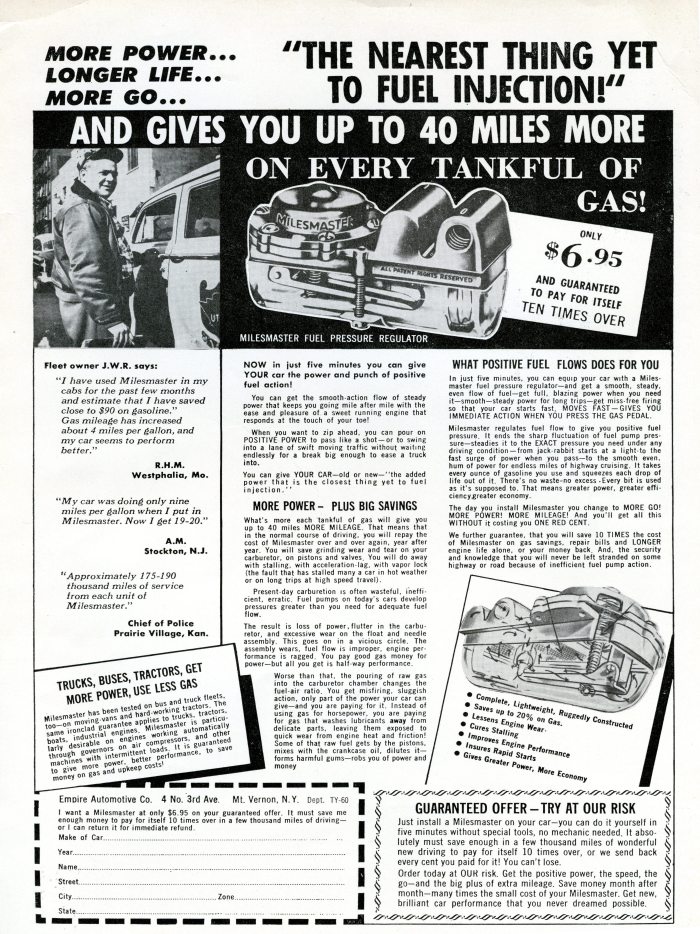 Scans are from “TRUE’S Automobile Yearbook for 1960”, which is in the author’s personal collection.

4 thoughts on “Back to Print: True’s Automobile Yearbook for 1960”