The good folks at “Hemmings”, publishers of several well-known collector car magazines, held their 11th annual Sports & Exotic Car Show on the grounds of the Saratoga Automobile Museum in Saratoga Springs, NY. The event took place on Saturday, August 6, 2016. In spite of a threatening forecast (and a published rain date of Sunday August 7), the organizers decided to press on, and the weather cooperated, as the show field remained sunny and dry, if a bit warm.

The show was open to “sports cars, GTs and exotics built outside the United States prior to 1992.” Those with newer imports were still welcome to attend, but would not have their vehicles judged.

My good friend Peter agreed to accompany me (and did most of the driving – thanks Peter!). Since I had attended one Hemmings show at the same location two years prior, I had reason to expect a professionally-run event, with a decent turnout and quality cars. We were not disappointed.

Arriving by 10:30 a.m., the show field was almost completely full. Cars were arranged by class, which for the majority of attendees was Country of Origin. As in years past, this show had several Featured Classes, including pre-1992 Jaguars, Porsche 356s, and Toyota Sports & GT cars. The big attractions for me were the two Italian Featured Classes: Fiat 124 spiders and Alfa Romeo spiders. Both the Fiat 124 spider and the Alfa Duetto/spider were celebrating their 50th anniversaries.

The entire event had a relaxed and casual feel to it. Most cars were prepped for judging, but unlike some other judged shows, the owners seemed carefree. (No one was spotted picking blades of grass out of their tire treads.) Everyone lazily walked the grounds, chatted up the drivers, and shared their stories. The verdant setting helped with the “stroll in the park” ambiance.

At 2 p.m. sharp, the Awards Ceremony began. There was a 2nd place and 1st place trophy for each of 13 classes. (I believe judging was done by that time-honored method known as “which cars do we really like?” Nothing wrong with that, either.) The winners were lined up and slowly driven past an admiring audience. By 2:30, it was over.

Hemmings hold two shows each year in Saratoga Springs, this one, and the larger Concours d’Elegance in September. If you haven’t been, either is highly recommended.

This Sunbeam Tiger was in a most unusual shade of baby blue, and we’re unsure if the color was an original choice from the factory.

This Austin-Healey Bug Eye Sprite was even cuter sans bumpers. 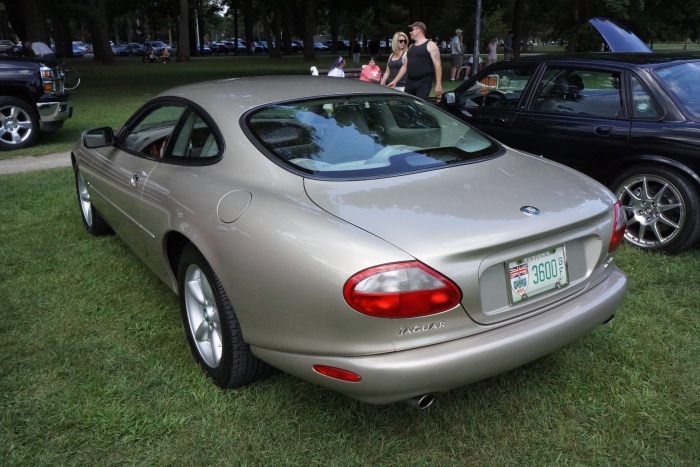 Porsche 356s were one of the Featured Classes.

Two of the more striking ones in attendance.

One of my show favorites: this 1969 911 has been with the same owner for 25 years. Paint was peeling off the driver’s door. He told us he didn’t care; he owns the car to drive it.

There were German cars there besides Porsche. This Mercedes Benz 230-SL had a side-facing rear jump seat.

An Opel GT, sold new in the U.S. by Buick dealers.

Another favorite: this 1979 Ford (not Mercury) Capri had been privately imported. The car was tastefully modified, was clean and straight, and must be a hoot to drive.

This Volvo 123GT looked authentic; at least it wore the correct badging. I don’t think I’ve seen an actual 123GT in about 20 years.

There were about 20 Fiat 124 spiders at the show, with cars from the first generation (late 1960s) right through to the Pininfarina-badged cars of the mid-1980s. As a former Fiat owner, it was difficult for me to believe that this many survived. Best of all, the owners were there just to have a blast. Bellissimo!

An early car: in addition to the chrome bumpers, note the slatted grille, and the small, round side marker lights.

The placard claimed this to be an unrestored survivor.

We spoke at length to the owner of the Positano Giallo car. He recently bought this car after it had sat, unused, in the previous owner’s garage for 30 years. There had been a small carb fire, and that owner gave up on it. The new owner refreshed the fluids, washed off 30 years of dust, and here it is.

This beauty took home 2nd place in this class.

The Pininfarina cars got their first dashboard redesign.

Here you see the 124 Spider tail lights evolve and enlarge.

The Alfa class was disappointingly small. However, the cars that were there were gems.

This Duetto, striking in grey, took 1st place in its class.

Modern Alfas, in the guise of a 4C coupe and 4C spider: 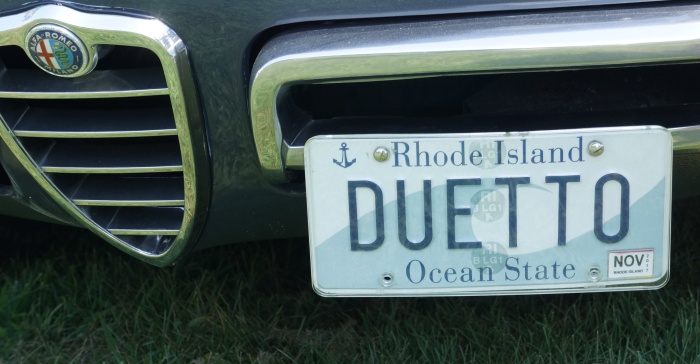 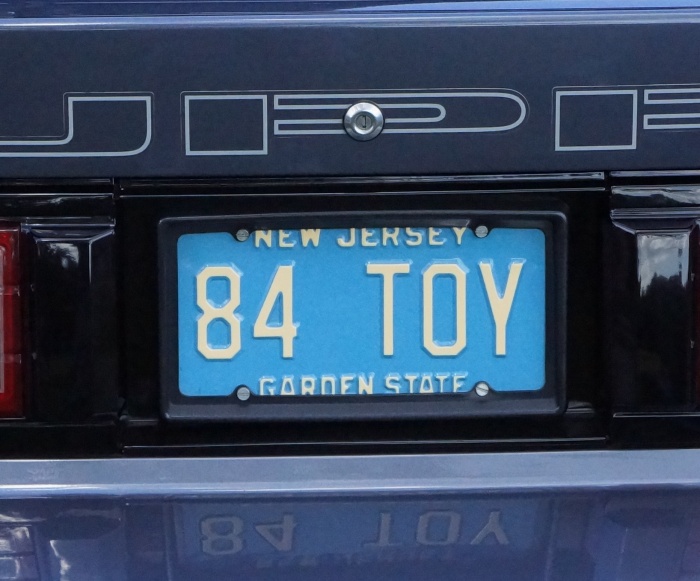