APRIL 2011: THE PETITE CONCOURS AT THE NY AUTO SHOW

Sometime early in 2011, I received an email from an outfit billing itself as “Teeny Tiny Productions”. Almost deleting it on the presumption that it was spam, I opened the email to discover that Teeny Tiny Productions was actually associated with microcars. Reading further, I learned that they planned to host a special exhibit at the upcoming New York International Auto Show (NYIAS), and this email was my personal invitation to participate. 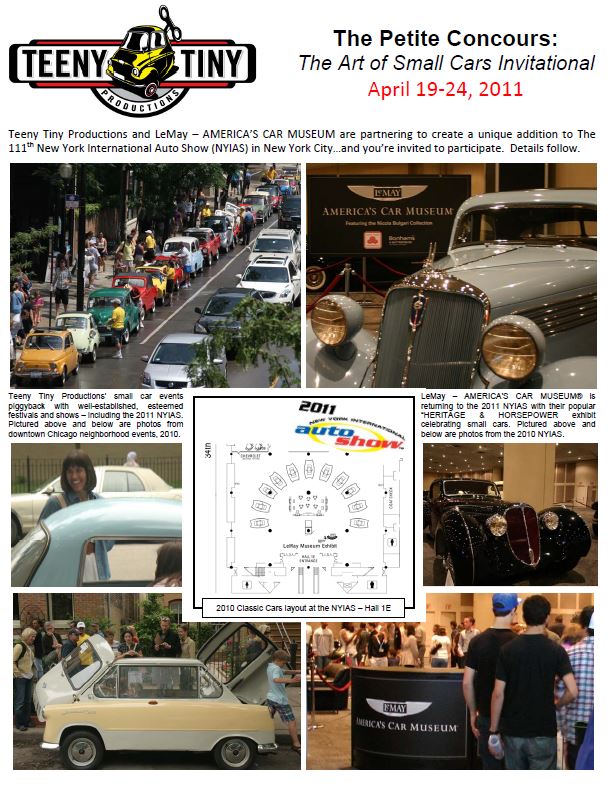 I called the provided number and spoke to a gentleman named Burt Richmond who assured me that this was legit. He and his business/personal partner Diane Fitzgerald had hosted a number of microcar-themed events in and around the Chicago area, where they resided. The email targeted me as an Isetta owner who lived in the NY Metro area. There were no costs to me outside of the need to transport the vehicle in and out of the city. He asked “are you game?” to which I replied “sure”, thinking that adding a display at the NYIAS to my Isetta’s résumé could only be a good thing.

According to the schedule I was provided, the “Petite Concours”, as the special display was named, would run only for the first five days of the show, including press days, and not its entirety. We owners would load our vehicles into the Jacob Javits Center before the show opened, and would get them out on a Sunday, after that day’s show had ended. This made it easier for me, as traffic in the area would be (relatively) minimized. Burt and Diane were on hand when I loaded in, and Burt was in charge of the floor arrangement. My car was chosen as one of four Isettas to be arranged in an “X”, with the cars’ tail ends inward. Thankfully, the vehicles were stanchioned off, and there was 24-hour security provided by the Javits crew.

Because we were in a room on the lower level, and not part of the main exhibit, I won’t pretend that the Petite Concours was a major spectator draw. Certainly, the other vehicles on display, which included Messerschmitts, Crosleys, Citroen 2CVs, old and new Hondas, Fiats, and NSUs, attracted some of the crowd that just happened to be meandering past, not necessarily aware of the special showing. As I’ve observed when an assortment of miniature cars is at a show, the Isetta becomes viewed as something that’s almost ‘normal’ when surrounded by some of its more abnormal contemporaries.

The five days went quickly enough; the probable highlight of the entire affair was being behind the wheel of my car and piloting it through the dungeon known as the Javits’s basement. I’ve walked the show enough times, and had the pleasure of attending so often on a press pass, yet never imagined there would be a day when my little bubble car and I would be in that locale together.

Later in the year, my good friend Dennis Nash called me up. He explained that he was very involved with an acquaintance of his who would be hosting a car show called the Monmouth County Concours d’Elegance, and 2011 was to be its 2nd running. Dennis said that they were quite short of judges, and asked me if I would judge for the day (no special training needed!). He also threw in the fact that the show vehicles were admitted as invitation-only, and he was extending such an invitation to my Isetta.

The show was scheduled for October 1, and checking my calendar, I noted that I had no conflicts, so I told Dennis I was in. Dennis’s only other request was that I arrive early that day for a judges’ meeting, and to be assigned to a team.

The day turned out to be cool and overcast, but we were thankfully spared the wet stuff, which counted for a lot, given that I was dressed in the de rigueur judge’s outfit of navy blazer, white shirt, chinos, and loafers (boater’s hats were optional). Dennis was running the judges’ meeting, and we were all put into teams of two. My judging partner was…. Dennis’s wife Ann Marie! I was happy to be with someone I knew, and the judging was quite informal anyway. There was a wonderful and eclectic selection of vehicles on the lawn, but to be blunt, the caliber of vehicles didn’t strike me as what I would expect to find at an “invitation only” concours. I did enjoy myself, in large part because the Nashes are a wonderful couple, and as dedicated to the old car hobby as any married pair I’ve ever met.

I don’t believe that the Monmouth Concours continued much past 2012, if it even made it that far. As well-intentioned as the show organizers were, they learned how difficult it is to put on a top-notch fling, especially with the calendar becoming more and more crowded with collector car type events every weekend from April through October.

The following weekend was Hershey, and of course I was there. Wandering the aisles during the Saturday car show, I spotted this forlorn BMW out for judging: 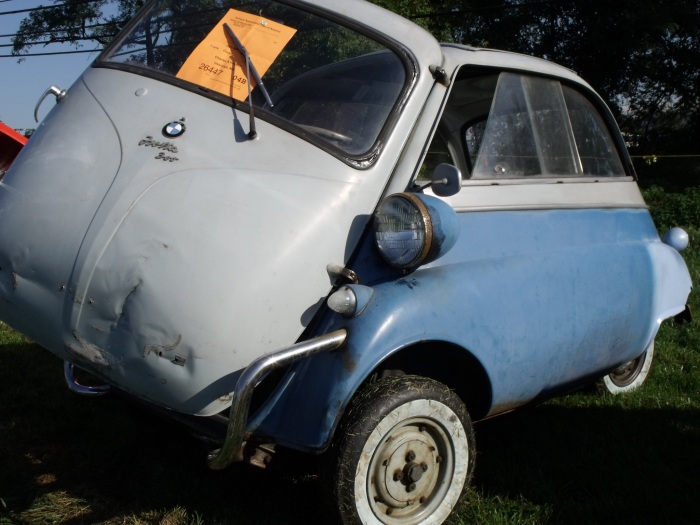 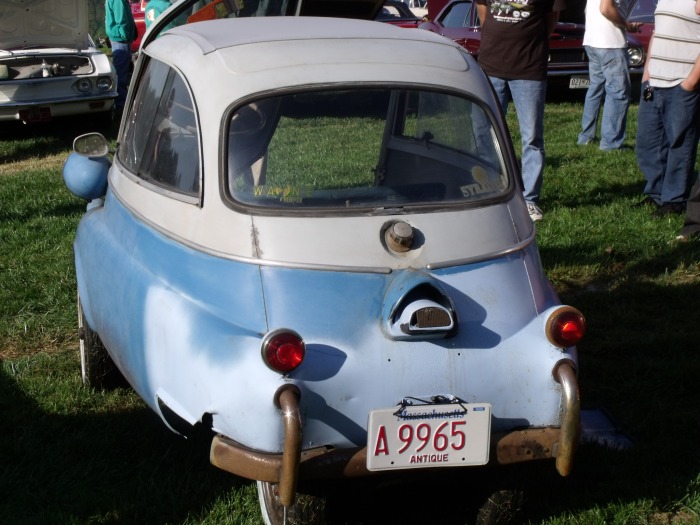 This was the germination of an idea – could I, would I, consider putting my Isetta on display at Hershey? Stay tuned for the answer!