Jody Fitzpatrick, proprietor of “The Shop” in Maplewood NJ, was my choice to oversee the body restoration of the Isetta for many reasons: he was personally recommended, the business was nearby my residence, his pricing was fair, we had a mutual understanding of what “done” looked like, and his estimated timeframe was reasonable. Another reason is that Jody assured me that I could visit and observe the progress whenever I desired (sort of like conjugal visits for the incarcerated).

Having read more than one “restoration shop horror story” (the car gets pushed to the back, 6 months pass with no progress, the shop demands more upfront money, they lose your car keys, or worst, they close the business and lock the doors with your car inside), having visitation rights was refreshing.

So visit I did.

Three times during that hot July of 1995, I stopped in to have a peek and to snap a few snaps. Jody was always very accommodating and genuinely happy to see me, and gave me free rein to walk around my car and chat up the crew doing the actual labor.

During the first visit, employees were using homemade scrapers to remove the paint. They had decided against chemical dipping or media blasting, fearful of inflicting further damage. They also hammered out any dents and other rough spots, in preparation for some minor welding and an eventual skim coat of putty in spots. (From my own research, I had come to learn that any talk of body repair that doesn’t involve some small use of plastic filler is fantasy.)

THE SHELL IN THE PROCESS OF PAINT BEING REMOVED: 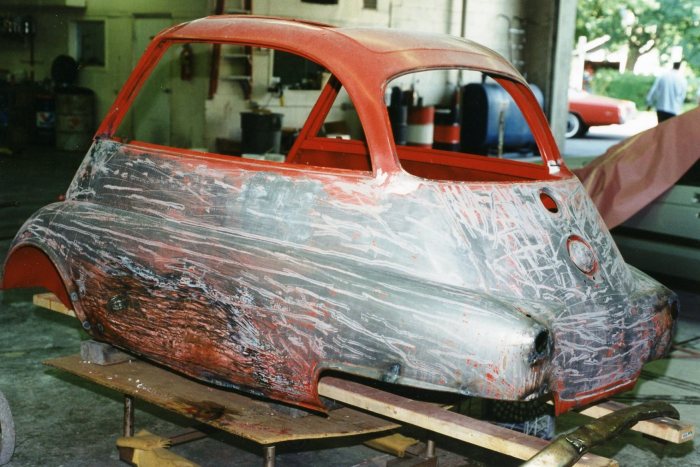 During this visit, Jody and I also finalized the choice of paint color. There was no known “official 1957 BMW Isetta paint code chart” we could refer to, so we did the next best thing. Sampling the unfaded paint we found under the BMW roundel on the door, we matched that to the closest shade among the modern paint code charts in Jody’s possession. We both agreed that the 1995 Ford Mustang shade of “Performance Red” was it. Jody stressed another advantage: should the car need touch-up or repair in the future, the correct paint would be readily available.

Just a week later, I saw the body with all the original paint gone, and the metal work beginning. I had given Jody a recommendation from John Jensen’s Isetta Restoration book for a method to reinforce the rearmost body panel at the tail lights and rear bumper. This section of the shell was not directly attached to the chassis, and was a known weak spot. Jody stated he would use the printed suggestion to add some additional metal in places.

HAND-SANDING THE FILLER AND THE GUIDE COAT:

During this 2nd visit, I pointed out a number of drilled holes which needed to be filled. These included where the dealer-installed mud flaps and luggage rack had been, neither of which were to be reinstalled. (I would later discover one which I missed, requiring the purchase of a somewhat pricey accessory in order to cover it!) Jody’s suggestion of grinding down the visible factory welds at the body panel joints was rejected by me, as I had every desire to keep to an original look.

Like a proud papa, I posed alongside the work-in-progress:

The third visit found the body in full primer. With the metal work done and its flanks as smooth as new, it was not difficult to visualize a freshly painted body shell. Jody had the door and all the other exterior pieces at The Shop, but he also generously offered to hang and align the door for me, something that was not part of our initial negotiation. I brought the freshly-plated door hinges with me so that he could do just that.

THE BODY IN FULL PRIMER, JUST PRIOR TO COLOR COAT: 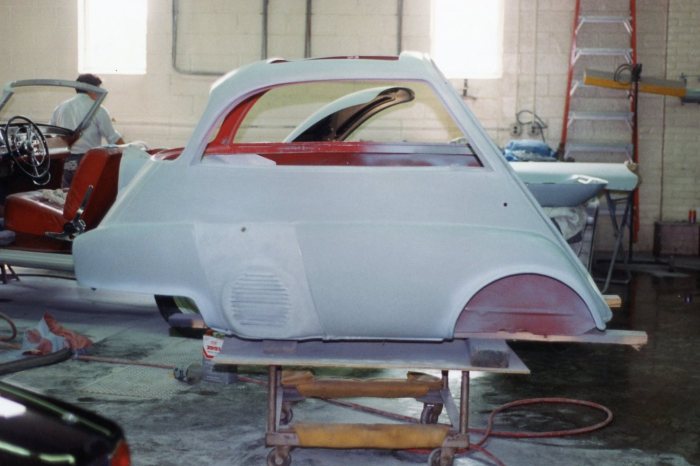 Perhaps the most exciting aspect was that the work was closely adhering to the originally estimated timeframe. Jody said that it might take a week longer than he hoped, but everything looked to be on track for a final pick-up by the end of July. And there were no “pricing surprises” either. Jody had gotten a $2,000 down payment upon drop-off, and he said that all I owed him at completion was the $2,000 balance plus NJ state sales tax.

A few days later I got the call. “It’s ready whenever you are.” That Saturday, I hooked up the trailer to the car and grabbed my checkbook. We were on our way.