The 2022 edition of the New York International Auto Show (NYIAS) began this year’s run with two press days, on Wednesday and Thursday, April 13 and 14. The show is open to the public from Friday April 15 through Sunday April 24. Located in the Jacob Javits Convention Center in the west 30s, the NYIAS was last held in 2019. Covid halted the proceedings in 2020 and 2021. Through my job at CARiD.com, I and two other gentlemen on our Creative Team were able to attend with press passes on Wednesday the 13th. 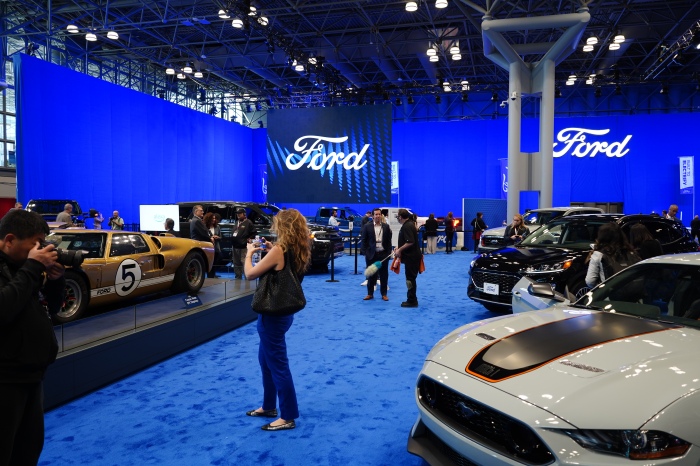 Walking into the Javits Center as I have done for this show since 1987, which is when it moved from the NY Coliseum at Columbus Circle, I could not help but be struck by the imagery. Everywhere I turned, the banners, posters, and signage all indicated The Main Attraction.

Can you say ‘electric vehicles’?

You would be forgiven for thinking that you had perhaps stumbled upon an All-EV show. Almost every vehicle manufacturer in attendance was touting the EVs in its lineup. Some of them, such as the Ford F-150 Lightning, have been known about for months and have been eagerly anticipated by the general public. Others, like the new brand Vinfast, have little name recognition at present.

Before we get further into the EVs (and there were plenty of very interesting ICE [internal combustion engine] vehicles on the floor too), it’s worth listing the manufacturers who were conspicuous by absence. This is nothing new, as the combination of online launches, rising costs, and new car intros scattered across the calendar have driven many manufacturers to conclude that physical auto shows are no longer worth the time and expense. Here’s who was missing: BMW, Mercedes, Honda, Acura, Jaguar, Land Rover, Mazda, Mitsubishi, Rivian, Tesla, Audi, Porsche, Buick, Cadillac, and GMC. Most puzzling was the participation of only some brands under a corporate umbrella: Chevrolet but not sister GM brands Buick, Cadillac, and GMC; and VW but not their Audi and Porsche brethren. While Chevy, Ford, Toyota, and Subaru among others consumed significant floor space, there still was lots of room for other stuff. And that other stuff was not one, not two, but three indoor test tracks, devoted to providing rides in EVs.

Think about it: with no concern about tailpipe pollution, EVs can be run indoors all day long (as long as charging is available). Ford had its own dedicated track, running the aforementioned Lightning and Mustang Mach-Es; Hyundai had its own track, with both Ford’s and Hyundai’s on the main floor; and downstairs, a larger track was shared among legacy and start-up EV makers including Nissan, VW, Volvo, INDI, and Vinfast. You should not be surprised to learn that attendees will be invited to ride, but not drive; for each ride there will be a professional driver behind the wheel. By the time the NYIAS wraps up, thousands of show-goers will have had an experience as a passenger in an EV. The car makers are hoping to turn those experiences into showroom foot traffic for their expanding EV offerings.

The two big surprises to me were the two brands I had not heard of until last week: INDI and Vinfast. INDI seems to have one model, cleverly named the INDI ONE, a large, 5-door, sloped roof hatchback reminiscent of the Tesla Model X. I had to do some online research after the show to learn that the company is based in California, although it’s sourcing parts from around the world. Their claim to fame is the under-hood computer, intended to allow a higher level of gaming for passengers. (Full disclosure: I do not see the attraction.)

Vinfast was founded in 2017 in Vietnam, and plans to be the first Vietnamese car maker to expand into global markets. They had three different EV models on the floor: the VF7, VF8, and VF9, all variants on the currently popular crossover SUV. Their styling was unoffensive bordering on mildly attractive (no attempt at ‘weirdness’ to make them stand out), and I was surprised to read online that the company has had styling assistance from Pininfarina and BMW. They have also announced that they plan to open a manufacturing plant in NC.

It had not occurred to me that I might see the VW ID.Buzz at the show, and a nice surprise it was. Photos don’t do justice to the ‘cheekiness’ of it. I broke into a spontaneous smile as I rounded a corner and found this update on the classic V-Dub Bus in front of me. It’s sized right, and for EV fans, it could be a worthwhile alternative to an EV SUV.

The Subaru Solterra, which shares its EV platform with the Toyota bZ4X, was featured within the vast Subaru exhibit. Let’s see if the Subaru faithful, whose passion is wed to that flat-4, will embrace a product without it. Volvo, despite a full lineup of sedans, station wagons, and SUVs, had only 2 cars at the show: an XC40 Recharge (hybrid), and a C40 EV. Rides in the C40 were available. 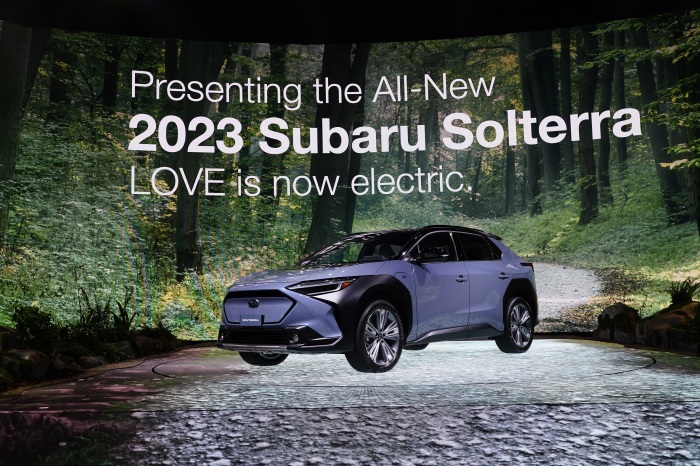 The Mustang Mach-E, which has been on the market for a year or so, was also visible at other displays. Here are four examples of the Mach-E EV done up in different liveries: 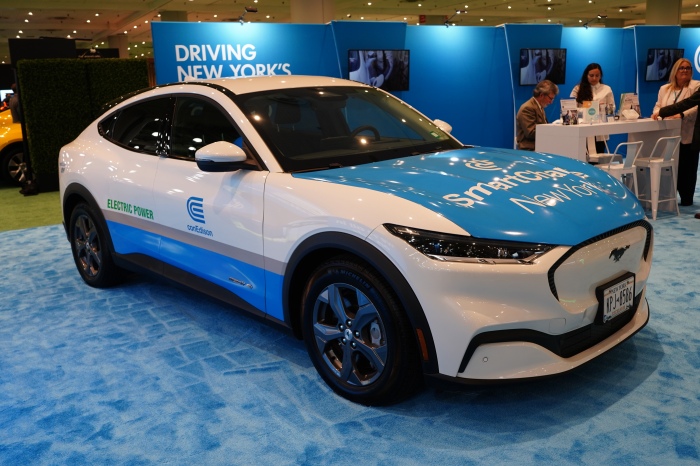 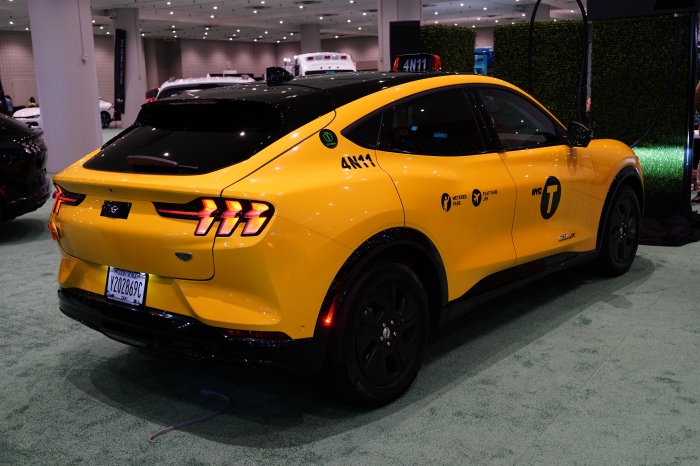 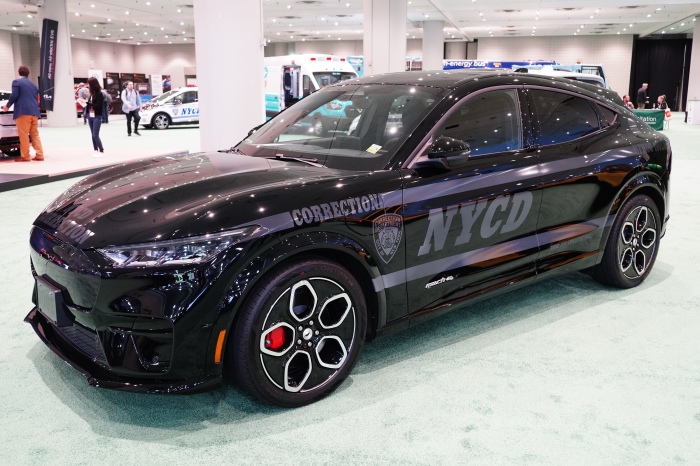 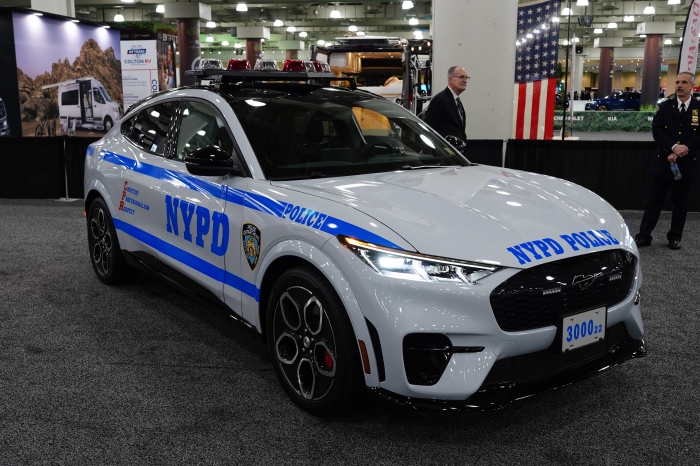 This automotive giant, created in 2021 from the merger of FCA (Fiat-Chrysler Automotive) and PSA (Peugeot-Citroen), sells the Chrysler, Dodge, Jeep, Ram, Fiat, and Alfa Romeo brands here. Roaming their large footprint on the main level, Jeep and Ram dominated, which is not surprising given the profits generated by those products. As examples, the new Jeep Grand Wagoneer was there, with one floor model priced at $103,000; the Ram TRX, which has been out for a while, was also present, with an MSRP of $97,000. The sole Chrysler vehicle on the floor was a Pacifica, although an updated version of the Chrysler Airflow EV concept was unveiled. Stuck in the poorly-lit back corner were Dodge (a single Challenger), Fiat (including two 500e EVs) and Alfa Romeo. The NYIAS marked the U.S. debut of the smaller Tonale SUV from Alfa, and it was quite the looker. Those attending the show specifically to see it might have a difficult time finding it.

Petrol power still has its advocates. Corvettes, Camaros, and Mustangs were on hand to entice those not ready to join the plug-in revolution. Toyota debuted its new GR Corolla, with a 3-cylinder gas engine pushing 300 horsepower to its front tires. Several copies of the new Nissan Z were there to be gawked at. And if you truly long for the good ol’ days, a small display of classic European and Asian performance vehicles, including a BMW M3, Acura NS-X, Porsche 911 Turbo, and Renault 5 Turbo, were clustered together in the rear of the main floor.

CHOOSE THE LEXUS GRILLE WHICH LEAST OFFENDS YOU: 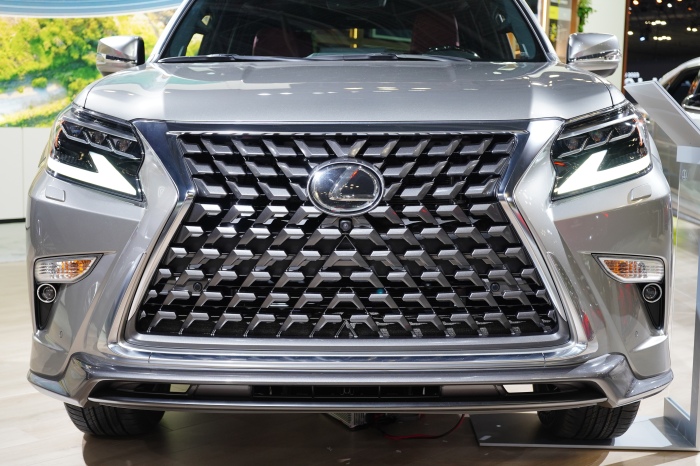 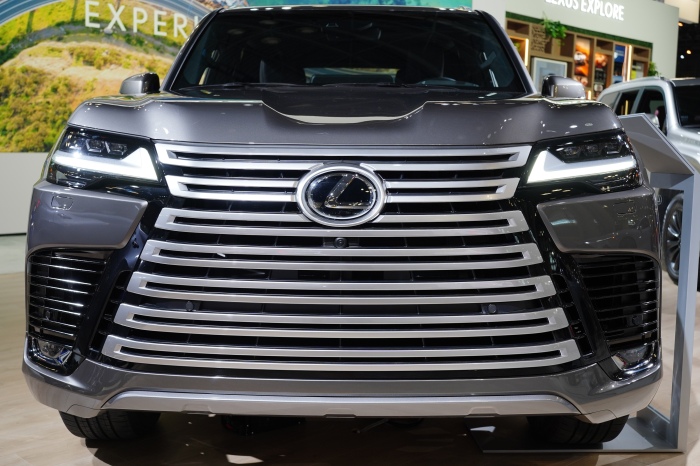 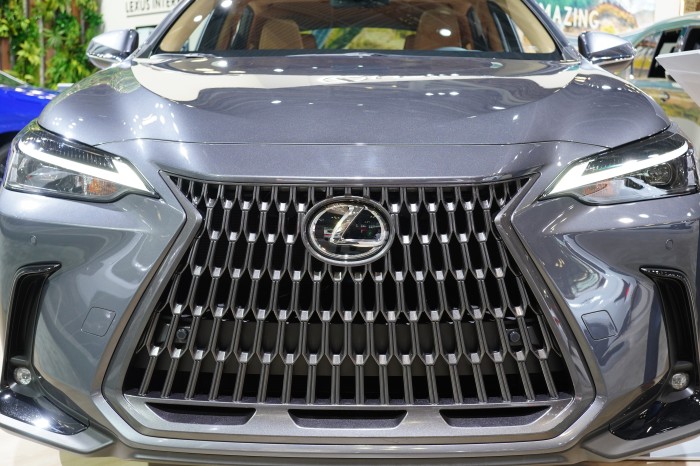 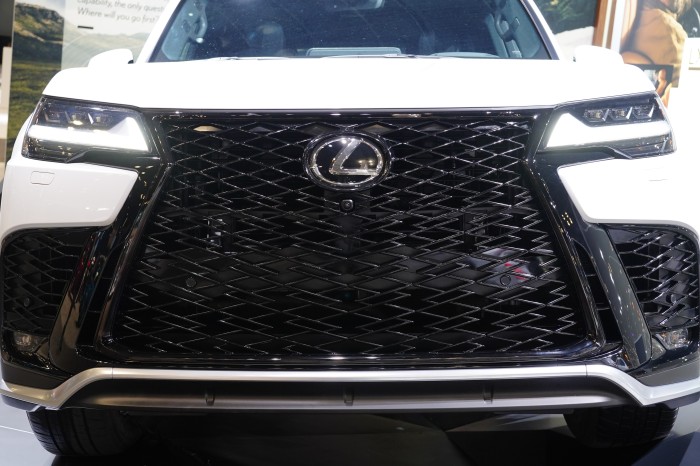 Despite making up fewer than 50% of the cars and trucks inside the Javits Center, EVs were clearly the stars of this year’s show. I wasn’t surprised by Tesla’s absence; I was by Hummer’s and Rivian’s. The other EV makers had no problem filling in the space they would have taken. As I was leaving, I realized there is a battle which has begun between the legacy automakers and the start-ups.

The legacy manufacturers are affronted by the new kids on the block. Many of the old timers have been at it for over a century and feel that they own the R&D process, whether ICE or EV. Yet Tesla, itself old enough to be considered a legacy car maker, went its own route, and did it successfully. Today’s start-ups, observing that success, are raising the cash, rushing to market, and trying to distinguish themselves in a field getting more crowded by the week.

Even the experienced ones are still trying to figure it out. Ford has 100,000+ orders for its F-150 Lightning, and after surveying existing truck owners, Ford paid attention when the survey results said “don’t make it weird”. On the other hand, Chevrolet’s new Silverado EV doesn’t resemble the existing truck, and the company is still about two yeas away from building deliverable units. Nissan, Hyundai, and Kia are deciding how different to make their EVs look compared to their ICE counterparts.

And here are INDI and Vinfast, expecting to ride the swelling EV wave. There is an understandable expectation that as the EV segment grows, there’s still room for new companies to capture their own slice of the pie. If history is any guide, and it should be, many of the companies entering the EV road race won’t make it to the finish line.