In Chapter 7, after figuring out how to take an Isetta engine apart, I did exactly that. With the help of my new Isetta buddy Ron Krause, it was hoped that someday I’d figure out how to get it all back together too.

This chapter of the Isetta Saga quite literally ties together all the pieces that make up the front end of the chassis. We get our first glimpse of something that looks like it might drive down the road (you’ll need to squint).

We had seen in Chapter 6 that the restoration work really began with stripping, cleaning, and repainting the bare chassis. Part of that process included removing all ancillary components from it: springs, shocks, brakes, and cabling. However, moving onto engine work didn’t mean that progress had ceased on the chassis. Parallel progress was being made which would get the chassis back on its four wheels again.

As a way to keep the project moving forward, I would work on several sub-sections of the car at a time. While I was waiting for the paint to dry on Part A, I was disassembling Part B. And while searching for replacements for the broken bits for Part C, Part D was soaking in Liquid Wrench because its bolts wouldn’t bust loose. And so on. Keeping this from disintegrating into a disorganized mess was helped by my infatuations with labeling and photographing everything. Hence, we have the photos I can share with you some 25 years later.

The Isetta’s suspension was somewhat conventional, employing coil springs over tube shocks encased in housings (a crude coilover) in the front, and quarter-elliptic leaf springs in the rear. In disassembling the front end, I noted that the springs and shocks seemed to be in good shape. The fact that there were no available replacements may have played a small role in my determination that these parts were “serviceable” and could be reused.

The springs had a 1957 date code on them, which meant they were factory original. They looked good, and I would guess that a 770 lb. car wouldn’t exert that much wear and tear on them.

One tricky part to the front end were the knuckles, which were designed to hold a small quantity of high-viscosity oil in them. The moveable parts of the suspension, which were the spindle and the swing arm, were lubricated by this oil. The fluid was held in place via metric-sized o-rings. Since I found ZERO trace of existing o-rings upon disassembly, I knew replacements were needed, and I was able to source the correct-size o-rings from one of my suppliers.

Most (but not all) Isettas made use of two-piece split rims, with the wheel halves held together with simple nuts and bolts. This arrangement required the use of inner tubes. One of my parts sources had the correct 10” tubes with the correct 90 degree valve stem. Although I had planned to let a professional body shop paint the wheels, I thought I could save some costs by sand-blasting them myself. Jorgen Carlsson, a Swedish engineer I met at work, happened to have his own sand-blasting cabinet, and lived not far from the office. How convenient. I loaded up the wheel pieces and headed over at the end of the work day.

Having never used a sand-blaster before, I imagined the process as similar to painting: aim the nozzle, squeeze the trigger, and viola, old paint and rust are wiped away. Well, not quite as simple as spraying on a new coat.

While the blast of sand does bring the part down to bare metal, it is a very slow process. The gun must linger on the spot for several moments, after which, there is only a small area cleaned. You then aim for the adjacent spot, as you clean off an area maybe the size of a quarter every few minutes.

There were 10 wheel halves (including the spare), and each piece needed to have both sides worked. I thought I’d be there for an hour or two; my recollection is that it was a very late night for me. Once I started, I felt I needed to finish it, and in actuality, the whole job probably took 4 or 5 hours. Jorgen was extremely patient with me, letting me stay until my work was done.

The newly-blasted wheels were taken to a body shop local to the office, with my instructions to “paint them white”. They did, and I picked them up later that week.

Next came a very controversial decision among my friends: were the wheel bolts supposed to show the BOLT HEAD or the NUT to the outside of the wheel? Remember that I had two chassis, and two sets of wheels. As I had received them, ALL the wheel hardware showed the NUT on the outside. There was no proof that the factory assembled them that way; but I had a hard time believing that all these wheels had had the hardware reversed. That’s how I reassembled the wheels, in spite of the razzing I got from more than one friendly “expert”.

When BMW sold new Isettas in the mid-to-late ‘50s, they left the factory with 4.80 x 10 bias-ply tires. Radial tires were around in the 1950s, but very few cars were so equipped. While I certainly had taken a strong turn toward originality for my restoration, I also intended to drive this car, and based on that, I was wanted to install radial tires, for safety, handling, and comfort, judges be damned. The equivalent size was a 145SR-10, and Michelin manufactured a ZX tire in that size. A contact inside Volvo was able to get me a set of 5 Michelins at a very favorable price (my handwritten notes say that I paid $26.67 per tire). The split rims meant that I could mount the tires myself.

The front suspension was easy to put back together (I made my own coil spring compressor from some threaded rod and steel strapping), and once that was assembled, two of the completed wheel-and-tire assemblies bolted right up to the chassis. 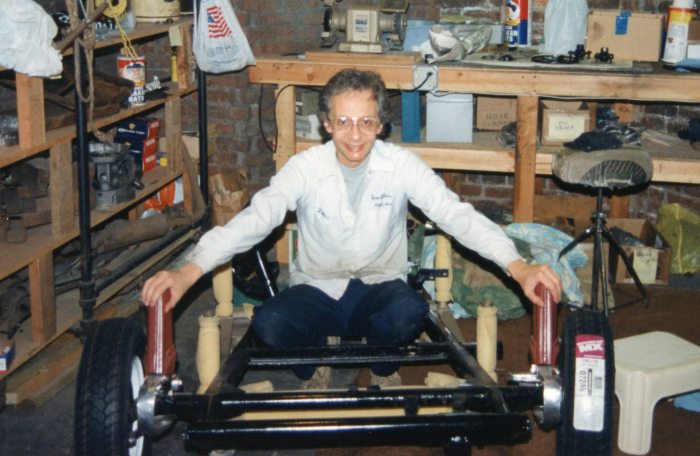 The grin on my face says it all: with about two years of somewhat sporadic work behind me, THIS moment felt like a giant leap: the chassis was again rolling, if only on its front wheels. The back half of the car was still a challenge, as that is where the drivetrain sat: even with the engine work coming along, I still had to get to the gearbox, rear axle, and rear suspension. But progress is progress, and as I gaze at this photo again, I’m reminded how this milestone pushed me to keep at it.

In our next installment (what am I up to, Chapter 54?), two engines get built up courtesy of the rebuilt cranks of Ron Krause; and the rest of the drivetrain is tackled, as the man with the toolbox rebuilds his first-ever manual transmission. Hey, it’s just a box full of gears.

All photographs copyright © 2018 Richard A. Reina. Photos may not be copied or reproduced without express written permission.

FUN FACT OF THE WEEK:

The radial tire gained almost immediate widespread adoption in Europe. But the U.S. car makers stubbornly stuck with bias-ply tires (U.S. market share of bias-ply tires in 1967 was 87%). That changed when in 1968, Michelin opened its first U.S. sales office, and Consumer Reports magazine reported on the superiority of the radial tire.