The Romans knew it all too well: “Tempus fugit”, Latin for “time flies”. But I don’t think the Romans were thinking of the Greenwich Concours d’Elegance when uttering those words. I certainly was saying “time flies” to myself when I looked at the calendar, saw that it was 2007, and realized that the Isetta would again be eligible to be shown at this favorite car show of mine. So I sent in my registration form, got my acceptance letter, and off we went!

Compared to 2004, the weather was much more cooperative, if still a bit warm and muggy for early June. My wife Margaretanne, for the third and final time, accompanied me to the show. The show organizers, Bruce and Genia Wennerstrom, have always made it a point to recognize all the hard work and effort that goes into bringing a car to an event. As such, Greenwich is one of the few car shows where vehicle owners do NOT pay an entrance fee; instead, catered breakfast and lunch are provided, plus this year, we took advantage of a cruise boat ride into Long Island Sound, a non-automotive diversion which my wife appreciated. 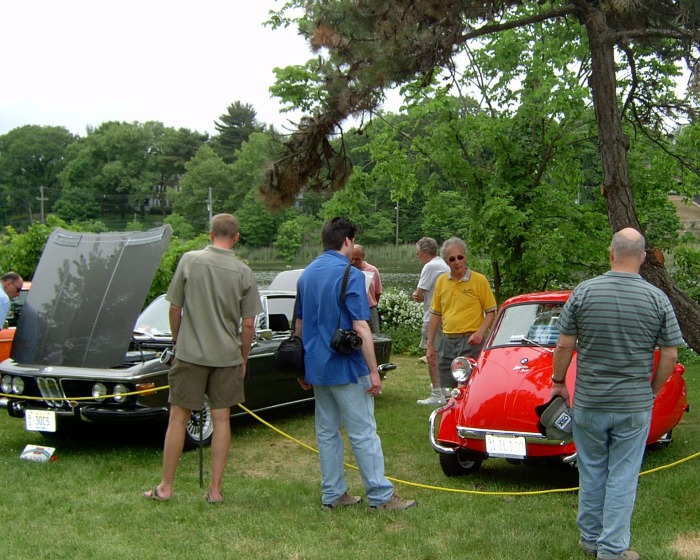 As happened in 2004, the Isetta was wisely placed among other BMWs, with some Porsches on the other side of it. And in another echo of 2004, there was another Isetta, this time, a European-spec 300 which had been beautifully restored. I enjoyed my time chatting it up with attendees about my car, and Bruce most generously awarded me with a Concours Europa – Most Fun Car trophy. During the ceremonial drive-by, he chuckled once again when I told him about my US-spec car having the “larger and more powerful 13 horsepower engine”!

At the end of the show, we drove the Isetta back to the parking lot, about a half-mile away, and began the process of loading the car onto the trailer once again. Several yards from me, I noticed an elderly man, who looked to be at least 90, struggling to roll his own open trailer into position. He was a dapper dresser in his plaid sport coat and tweed cap. A woman who may have been his daughter was scolding him that he shouldn’t be pushing the trailer on his own, which didn’t phase him one bit. He looked familiar to me, so I took a chance and approached him.

“Excuse me, are you John Fitch?”

“It’s a real pleasure to meet you.”

“Thank you very much!”

With that, I shook the hand of 90-year-old John Fitch, race car driver, inventor, and on this day, just another participant at the Greenwich Concours d’Elegance.

8 thoughts on “The Isetta Saga, Chapter 28: The 2007 Greenwich Concours d’Elegance”