Now in its 58th year, Das Awkscht Fescht (The August Festival) was held in Memorial Park in Macungie PA on August 6, 7, & 8, 2021. This three-day show, with slightly varied themes each day, is one of the longest-running classic car events in the Northeast. I was a spectator this year on Saturday, on the presumption that the greatest number of vehicles were likely to show up that day. Still, compared to previous years (I posted about my 2017 visit on this blog, and have been a sporadic attendee since the 1980s), the field was perhaps 80% filled.

“Macungie”, which is what we call it, is an appealing show: it’s set on grass within a park which offers lots of shade; and it offers non-automotive attractions including craft displays, a live petting zoo, and a bandshell with live musical entertainment. Saturday’s show cars were approximately arranged by decade. The featured marque(s) was Cadillac/LaSalle, and most of those vehicles were situated under one of the few tents on the property.

Overall, the quality and variety of vehicles were outstanding. Domestic brands comprised about 98% of the vehicles on display, but a few of the import makes were standouts (see sidebar below). Members of the NJ Region of the AACA turned out in some force, and the National AACA had a trailer on site, making Das Awkscht Fescht a quasi-official AACA event.

Photographically, I challenged myself by bringing only my 85mm prime (non-zoom) lens on my still new-to-me Sony camera. This lens takes great pictures, and the results look to be marginally sharper than the 28-60mm zoom lens I use 90% of the time. The challenge, however, is that for a full-body front or rear ¾ shot, I need to be about 25 feet away from a car, and accomplishing that at a show crowded with show-goers requires long waits for just the right moment. One trick which I’ve used at Hershey was to position myself on the street outside the show and capture cars as they drove in, an effect that worked well here. As another alternative, many shots are of only a portion of the automobile; in those cases I attempted to highlight some interesting design feature.

The Macungie show is a great PA tradition, always held the first week of August. Like other Northeast stalwarts such as Hershey and Lime Rock, this one is perennially on my calendar. Maybe next time I’ll bring a car!

TWO CUTIES, A CROSLEY AND A VESPA:

SIDEBAR: Mike, Barry, and the Fiats

As I crouched low to take additional photographs of the pristine white Fiat 124 Spider in front of me, the gentleman to my right spoke up. “It’s nice to see someone besides me who likes these cars!” We exchanged pleasantries for a few moments about our shared passion for the Italian cars from Torino, and he introduced himself as Barry. “Are either of these (a black one was parked next to the white one) yours?” I queried. “No”, he responded, “but I help the owner take care of them”.

Within a few moments, a younger gent joined our conversation. I quickly learned that his name was Mike, and that he owned both 124s on display (along with the BMW E30 convertible next to them). The white ’79 2000 Spider caught most of my attention, as the sign claimed that it was an 8,000 mile, all-original and unrestored car. Mike related that he bought the car about 8 years ago from an ad in an FLU (Fiat-Lancia Unlimited, the old Fiat club) newsletter. The ad contained no photo, just the briefest of writeups. The car was in L.A., while Mike was in PA. He subsequently learned that this car had been bought new by Jerry Zucker, the movie producer of “Airplane!” and “The Naked Gun” fame. Mike never spoke with Jerry, but apparently negotiated the terms of the sale with one of Jerry’s spokespeople. He rolled the dice, he said, when he bought the car sight-unseen and then had it shipped back east. He was pleasantly surprised at its condition, and although he does drive it, he said he strives to continue to keep the mileage low.

The black car, strictly speaking, wasn’t a Fiat but a Pininfarina (extra points to Mike who knew exactly why a “Pininfarina” wears the letter “f” as its name bade). Although I didn’t record it, I believe that the newer Spider was an ’83, which would make it the first model year for the renamed Pininfarina Azzurra. (When Fiat abandoned the U.S. market in 1982, Pininfarina took over marketing of the Spider for the States.)  Both cars were near perfect, and it was a delight to see them parked side-by-side and note the differences, especially in the interior. However, I was so engrossed in conversation that I failed to snap any shots of the newer Spider.

It turned out that Barry, as a friend and neighbor, does much of the mechanical upkeep on Mike’s cars. The two of them were as enthusiastic and knowledgeable about all things Fiat as they could be. Barry in particular was impressively able to recite nuances about interior detail differences across all the Spider generations. All in all, I spent about 30 minutes in delightful conversation with both these gentlemen. Meeting and talking with them was the highlight of my visit to Macungie that day. 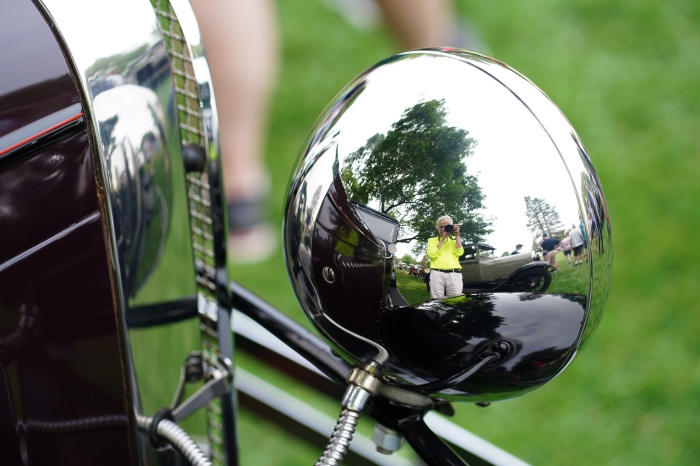