Skip to content
HomeThe Isetta Saga, Chapter 34: The Isetta Gets to Hershey in 2012

It was probably 1982 and I was at Hershey, in PA, in October, at the big annual AACA Hershey show. It was perhaps only the 3rd or 4th time I was there. I was young, and this was still all new, and I had so much to learn about the collector car hobby. I was living in an apartment without a garage. I had my Isettas stored in one garage not near me, and my ’57 Ford Skyliner stored in another garage not near me. I still dreamed of that future point in time when I would get back to these cars to perform a complete restoration on each of them. However, I had no real concrete plan for getting to that point.

As I strolled the aisles of that Saturday car show, I was still learning that these cars were here to be ranked and rated by AACA judges. The judging was a very strict and formal process. The car owners took this very seriously, and very much wanted to win. They wanted their 1st Junior, or 1st Senior, or their Preservation Award, things I had yet to learn about. It was neat for me, the neophyte, to discover that the vehicles were arranged in something resembling a sensible order, based on year, make, and model.

A particular recollection concerns the Baby Birds, the 2-seat Ford Thunderbirds only made from 1955-1957. They were all lined up, in their candy colors of red and blue, and pastel colors of green and yellow, and monochrome colors of black and white. They didn’t look like cars! They looked like edible sweets on a shelf. As I walked down this row of cars which were barely 25 years old, I could not get over how perfect each car was. With hoods up and trunks open, reproduction chalk marks and ink stamps were exposed. It was clear to me, the newbie, that these cars were rarely, if ever, driven.

The entire spectacle depressed me. How does an owner, I asked myself, get to a point that the car is so perfect that it’s not driven? Was this what the hobby was about? I was yet to learn that some owners did indeed treat their cars as trailer queens, driven only on and off trailers, and brought to shows only to collect awards. It was impossible for me to imagine a day when I would show a car at Hershey.

Fast forward exactly 30 years, and here I was in 2012, with a car of mine on the Hershey show field. I was as giddy as could be, and while I took the whole spectacle seriously, the event was eliciting a reflexive ear-to-ear grin that I could not erase. How did I get to this point? Having joined the National AACA around the year 2000, and attending almost every Hershey since then, the urge to enter a car was growing. With over 10 years of experience in showing the Isetta, as you’ve been reading in the Isetta Saga, it was time to put the car in the big boys’ show.

There was not much prep necessary. I had my trailer and my hitch-equipped Volvo V70 ready to make the journey. A logistical issue for anyone bringing a show car to Hershey is the question of “what do I do with my car during the week?” The judged show is always Saturday, but the flea market / car corral begins four days prior on the Tuesday. Owners who drive their show cars to the event leave them overnight in the hotel parking lot. They’ll then use those cars to commute back and forth during the week. If they have a flea market spot, they’ll just drive it onto the field and park in their spot.

My little Hershey secret, which I had begun to use about 10 years prior, was to stay at a local Bed & Breakfast in lieu of a hotel. (I refer to it as a ‘secret’ because if too many show attendees started doing the same, it wouldn’t be as easy to book a room. Compared to hotels, which start booking rooms for next year’s event the day after this year’s event ends, I found that local B&B’s had rooms available as late as 6 or 8 weeks before Hershey week.)

The B&B’s were more comfortable than hotels, they included breakfast (to go if I asked), and were about the same cost. There was a B&B in Dillsburg, located halfway between Hershey and Carlisle, which I started frequenting. When I called for the reservation, I asked permission to leave the Isetta on its trailer somewhere on the grounds. The woman proprietor, with whom I was on a first-name basis, told me that was absolutely fine, and said she had a spot behind the barn where my rig would be away from other guests’ cars, as well as out of sight from the road. Upon my arrival, I put the trailer where asked, unhooked it, and was then able to use the Volvo to-and-from the show during the week.

Once Saturday morning arrived, I reconnected the trailer and was off to ‘trailer parking’. AACA had set up a lot about 1.5 miles away from the show field dedicated to the dozens and dozens of trailers which needed to be staged somewhere. I asked my bestie Larry if he wanted to meet me there and ride with me in the Isetta, and he was more than game. As he climbed in, I handed him my camera and asked him to take as many photos as he could manage. We were literally in the parade of cars that I had witnessed as a spectator on so many prior occasions. 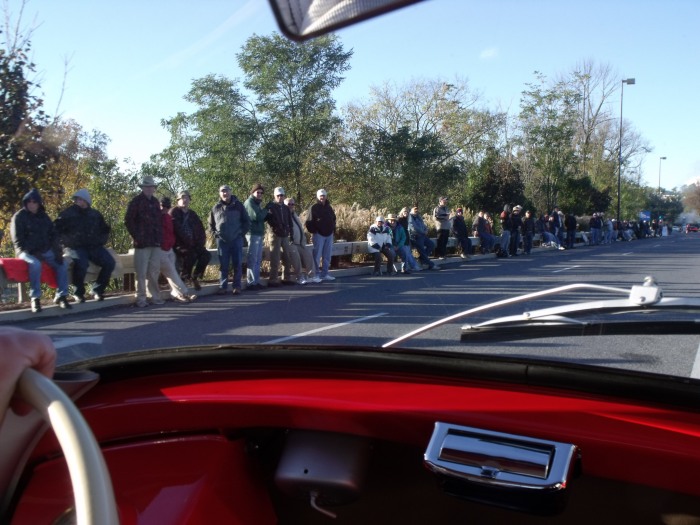 Once at the grounds, I was directed to my parking spot in Class 04B, “small vehicles 1942 and later” (04A is 1941 and older). I parked next to the only other Isetta at the show that day. Other cars in my class included a Vespa and several VW Beetles (which look large next to an Isetta). I exited the car, put up my signage, and stuck around as required for judging. The judging team was there soon enough to do their thing. Once that was done, I was free to walk around, but as is my wont, I preferred to stay near the car and engage with attendees.

The other Isetta was a beautiful two-tone blue & grey car, from Maryland, and the car was there for its Preservation Award, meaning that it had already achieved Senior status. Cosmetically, I thought it was a notch above mine; it certainly looked ‘fresher’ (I wasn’t telling anyone that the paint on my car was already 17 years old). The owner was sitting in her folding chair behind her car, and I went up to her to make a sincere effort to both compliment her on her car as well as engage her in conversation about it. When I asked her some details about the restoration process, she demurred, and didn’t really make any attempt to answer my questions. What eventually came out of our conversation was the realization that she was not an active participant in the car’s restoration. It’s what we call a “checkbook restoration”; she wrote the checks to the shop that did the work, and picked up the car when it was done. This is not to take anything away from the obvious quality of the work. But there is something to be said for taking more ownership of your own restoration, which helps elevate the understanding of how the car is designed, engineered, and built, and how it operates.

Around 3 p.m., the show cars began to exit the field. It was a magnificent day on so many levels: the car ran great, the judging went smoothly, the audience enjoyed it, and I enjoyed the audience. It helped that the fickle Hershey weather was near perfect. I drove the car back to the trailer parking, loaded it up, and headed home, arriving before dark.

A few weeks later, a letter arrived in the mail from AACA, announcing that I had succeeded in winning my 1st Junior award (there was, as always, an Award Banquet on Saturday night, but I did not attend). Had I been there, I would have been handed my trophy. The letter from AACA informed me that if I wanted the trophy, I would need to pay the nominal shipping cost, which I did.

At the close of 2012, I realized that I had been trailering my Isetta to various shows throughout NJ, NY, CT, and PA for the past 13 years! While I had previously made half-hearted attempts at selling the car, with absolutely no success, I knew that 2013 was going to be the year to let it go. I had had my fun. An auction was the best choice, and it was a question of selecting an auction company, having already held preliminary conversations with both Bonhams and RM. The Bonhams auction I had in mind was their Greenwich event held in conjunction with the Greenwich CT Concours in early June. For RM, the Hershey auction in October was also being considered. I had some time to decide, however, the wheels were firmly put in motion at the end of 2012. After 35 years of ownership, and 13 years of show attendance, it was time.