My musk green 1967 Alfa Romeo GT 1300 Junior had barely been in my possession for two months in 2013 when I entered it in its first judged show. This was the annual event conducted by the NJ Region of the AACA (Antique Automobile Club of America), held by tradition on the first Sunday in May. In 2013, the actual show date was May 5, and also following tradition, it was held in the parking lot of the Automatic Switch Manufacturing Company in Florham Park NJ. (Long-time club members simply referred to the location as “Automatic Switch”.) 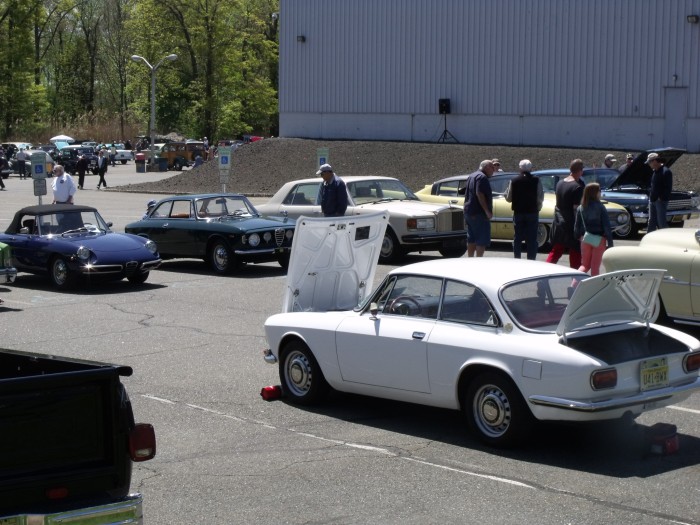 The drive from our home in Neshanic Station was only 30 minutes, but it was a good test for the much longer 2013 New England 1000 classic car rally, coming up two weeks after this outing. When I had purchased the Alfa from my good friend Pete, it had already earned its HPOF (Historical Preservation of Original Features) award, and by AACA Judging Rules you cannot switch classes back and forth willy-nilly, so it was dutifully entered into HPOF. As the photos attest, there’s always an eclectic assortment of vehicles on either side of you in this class.

Arriving and parking early gave me the chance to grab my camera and walk the field, looking for other interesting cars to photograph.  I was not disappointed by the fine mix of pre-war and post-war, dometic and import, all glistening under the bright spring sun.

All cars are judged (unless an owner expressly requests to be excluded), and NJ Region judging loosely follows National’s rules. By the end of the show (around 3pm), the parade of vehicles driving up to the ‘viewing stand’ to receive their trophies from the Region’s President arrived three abreast. My Alfa received a special award, considered only for cars owned by club members: it won the “Best Unrestored Vehicle” in its age group. I was pleasantly surprised at the recognition, not expecting much of anything for the car at its first outing! Aside from a battery and a set of tires, I had also not done anything to it yet. The Alfa got me home without incident, and back into the garage it went as I patiently waited for this year’s NE1000 to begin.